Give Grass a Pass 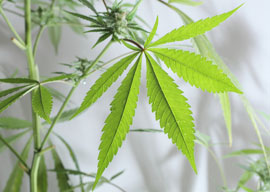 The talk is all of pot. Not “pot” the utensil, as in Confucius’s fine aphorism “A man is not a pot,” but cannabis sativa, AKA grass, tea, weed, bud, ganja, Mary Jane, bhang, wacky baccy. States are legalizing the stuff all over, although, since pot remains federally proscribed, there are some tricky matters of jurisdiction to be sorted out.

The president himself has declared his support for general legalization, although of course he put an anti-white spin on the issue: “Middle-class kids don’t get locked up for smoking pot, and poor kids do. And African-American kids and Latino kids are more likely to be poor….”

In fact, nobody gets locked up for smoking pot. You get locked up for dealing in it, especially in the street, and for being in possession of it, usually when the peelers go through your pockets after arresting you for something else. Blacks and Hispanics do far more street dealing than middle-class white kids and also commit much more general crime. The result, as mathematicians say, follows.

Or as Neil Munro observes in The Daily Caller:

[The 2013 ACLU report “The War on Marijuana in Black and White”] shows that some of the most disproportionate arrest rates occur in jurisdictions run by Democrats or African Americans, such as Washington D.C., New York, Maryland and Illinois, Baltimore and Prince George’s county in Maryland, as well as the cities of Memphis and Philadelphia.

The high ranking for jurisdictions where African Americans are politically influential or dominant suggests that the data merely shows that different behavior by different groups may yield different consequences, not that the nation’s laws are unfair or racist.

One of the best reasons to support legalization, in fact, for those of us at the fascist-hyena end of the opinion spectrum, is the prospect that we may never again have to listen to a Cultural Marxist tell us that the disproportionate jailing of NAMs for pot-related offenses proves that society is racist. The charge is easily refuted”see above”but it’s tiresome to have to keep repeating yourself.

I can’t get much exercised about the issue. It would surely be a healthier world if people didn’t feel the need for narcotics, but you could say the same of any other human weakness. Knowing not to ask too much of people is a key element of political wisdom. Gradual social change removes excesses in time; at least, it removed the widespread drunkenness of the 19th century and the promiscuous tobacco smoking of the mid-20th. In the matter of marijuana, I think the libertarians are correct: The price of continued prohibition is too high, certainly higher than the price (which will not be zero) of legalization.

For those of us who came of age in the 1960s, there is something a bit absurd about continuing prohibition. I can testify that in London student circles in the mid-1960s, the lesser kinds of narcotics were hard to avoid if you had any kind of social life at all. Pot and hash were everywhere, as common as booze and fags.