Give Me Your Keys, Then We Can Talk About Open Borders 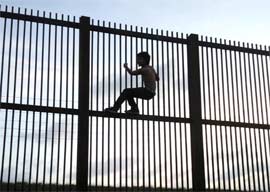 When was the last time you heard an open-borders globalist referred to as “right-wing”?

The transnational corporate and media elites who seek to smash borders and force 7.4 billion fundamentally incompatible human cattle together into a single inescapable One World Ranch claim that their motive is a lofty one”they seek to end perpetual conflict between nations.

That’s nice, but anyone with two unmedicated brain cells to rub together realizes that the end result of this daffy rainbow scheme would be perpetual conflict within what were formerly nations. It’s all unfolding with alarming speed before your lyin’ eyes at this very moment.

The leftist global elites”and there is no other kind of global elite”use the peasants like inanimate chess pieces in order to work out their own sick and warped guilt complexes. They live in all-white neighborhoods while smearing as “racists” the poor whites who have no choice but to live alongside a black underclass that is openly encouraged to resent them. They chatter and chirp about gun control while surrounding themselves with armed bodyguards. And they push a world-without-borders scheme while making sure they’re safely ensconced behind high walls and electronic gates.

“I hear fearful voices calling for building walls and distancing people they label as others,” burped curly-haired mega-zillionaire Mark Zuckerberg earlier this year in an obvious swipe at Donald Trump. You may have heard of Zuckerberg before”he built a wall around his home in Palo Alto, CA and tore down four houses surrounding it. His personal security team protects that home around the clock. About a month after slamming Trump for wanting to build a wall along our southern border, Zuckerberg built another wall around his house in Kauai, reportedly blocking an ocean view for the less wealthy and less famous residents surrounding him.

“What were you saying about the ‘wrong side of history’ again? The recent historical thrust is in one direction”more walls.”

In March, Pope Francis delivered a speech in St. Peter’s Square urging the world’s leaders to fling their doors open and receive the “humble” migrants who seek a better life and sure don’t mean no trouble:

How is it possible that so much pain can strike innocent men, women and children who find doors closed to them when they attempt to go elsewhere? And they are there, on the border, because so many doors and so many hearts are closed.

But not only is Vatican City surrounded by huge walls, the Catholic faithful who heard the Pontiff’s speech had to pass through metal detectors merely for the privilege of huddling beneath him. And I’d wager that the grand total of impoverished believers who were invited to sleep and eat at the Vatican was precisely zero. (I’m still bitter from being denied entrance into St. Peter’s Basilica on a 100-degree summer day in 1985 merely for the crime of wearing a tanktop.)

When the nation of Israel finishes constructing its border wall with Jordan, it will have entombed itself completely within walls. A 2014 headline in The New Observer asked, “Netanyahu Demands Jews-Only State”So Why do America’s Jews Support Open Borders for the US?“ That’s a great question that leads to another great question: Why have I never seen that question asked in a major American newspaper or on a TV program?

Republican Congressman Paul Ryan runs neck-and-neck with Hillary Clinton as the most soulless and sold-out politician alive. He has openly decried the “ignorance” of immigration opponents, and his trillion-plus-dollar omnibus spending bill last year couldn’t find wiggle room in that vast budget to allocate a relatively paltry $4 billion to finally make the decade-old Secure Fence Act a reality. But while shirking legal responsibility for building a fence along the southern border, Ryan made sure to build a tall border fence around his own property, which just so happens to be constantly manned by a paid security agent.

What can I say about Hillary Clinton that hasn’t been said about genital lice? Well, I can say that in Philadelphia at the Democratic Convention as she trotted out an illegal alien woman and her anchor-baby daughter before an adoring crowd, police outside were arresting anyone who tried scaling the eight-foot fence the DNC had constructed to protect themselves.

Not only that, a mere ten years ago she told the New York Daily News“you may have heard of it, since Shaun King writes there”that to fight illegal immigration from south of the border:

A physical structure is obviously important. A wall in certain areas would be appropriate.

But the propaganda machines keep skull-hammering the masses with the idea that the future will be a borderless one and that anyone who proposes building walls is living on the wrong side of history.