Give the Bigots a Pill 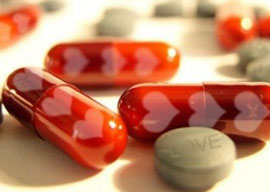 Get in line, all ye racists”they have a pill for you now.

As a friend of mine asked, “What’s next: an enema that cures homophobia?”

The study, “Propranolol reduces implicit negative racial bias,” was recently published in Psychopharmacology, and all the Tribbles on the Starship Equality are purring with glee at the idea that science has FINALLY found a pill to cure the evil racist scourge. Online comments sounded happy little bugles at the advent of a Brave New Progressive World in which Propranolol replaces Soma:

This pill should be mandatory for all right-wing Republicans, tea bags, KKK, people who hate the immigrants and want them deported, etc. What a much better world this would be.

Let’s put Propanolol in the water supply and stamp out the ugliness of Republicanism forever.

Stop being so paranoid, and take a chill pill. So what if the white race are wiped out.

There’s already a pill to cure racists, it contains cyanide 🙂

Why, that last comment there might be the gosh-darned cutest use of a smiley emoticon in the service of literally exterminating one’s ideological enemies that I”ve ever seen!

Ironically, Propranolol was developed by a Scottish scientist whose surname was Black. The pill appears to target brain areas that regulate fear, making that lion who’s stealthily creeping toward you seem like a furry little pussycat.

“How about we work on a pill that cures extreme partisan psychosis?”

The recent Oxford study regarding the pill’s ability to reduce “racism””a social construct which to this day no one has been able to define to my satisfaction”was based on an unforgivably tiny sample of 36 participants, only 18 of whom received the Propranolol while the other 18 took placebos. Displaying what perhaps is egregious explicit racial and gender bias, researchers selected only white males as their guinea pigs.

In summarizing her study’s results, lead author Sylvia Terbeck said something that resonated with me emotionally:

Implicit racial bias can occur even in people with a sincere belief in equality.

Hey, I think that’s happened to me, too. Even though I sincerely wanted to believe people are equal, something inside me told me that they aren”t. So now there’s a pill for that? I simply pop a pill in my mouth, and everything’s eraced?

The researchers noted that the pill had no effect on “explicit” racism, a presumably measurable object they measured by giving the participants a questionnaire regarding how “warm” one feels toward ethnic groups and left/right politics in general. Researchers conceded that the “dominance of political norms of equality and tolerance in Western democracies limits the overt expression of prejudice””in other words, publicly expressing “racist” views threatens the prevailing political power structure and is almost universally considered a thought crime.

The study’s observed differences were all in the mystically mossy realm of “implicit” racism, which supposedly measures one’s subconscious bigotry by making you play a rapid-fire online game.

High-paid anti-racist witch hunters get blisters on their feet walking coast to coast trying to find evidence of discrimination and overt racial hatred these days. Yet despite the lack of visible barriers, they note”accurately”that not everyone in society is performing equally. So they insist that such “disparate impact” is caused by fundamental unfairness rather than something as screamingly obvious as disparate ability.