Giving Away the Gender-Bending Ending 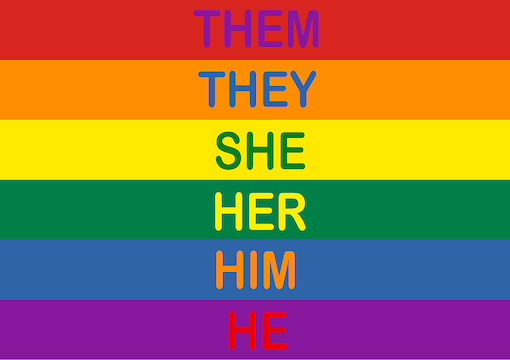 If there’s one thing I’ve learned in my 53 years on this earth, it’s to never interrupt a good mania. Because you can’t. Manias simply have to play themselves out.

In 2020, the mania on the right about how Covid came from a Chinese lab was so intense that when I pointed out that there was no convincing evidence beyond the circumstantial, Steve Bannon took a brief break from bilking his followers to call for my firing from Takimag.

The left, meanwhile, had its own lab origin mania: It was a “racist conspiracy theory.”

“You can sit there yelling ‘groomer’ all you want. Won’t make a difference—the ending’s good as in the can.”

Two years on, the manias have faded. The left acknowledges that the lab theory is worthy of investigation, and the right didn’t have a collective seizure when two new studies (a comprehensive mapping of all initial cases and a detailed examination of early Covid samples) supported the wet market origin with fairly solid evidence.

I’ve been scolding the right quite a bit recently regarding “say groomer.” No more; it ain’t worth the aggravation. I’m just gonna let things play out.

And for the record, here’s how they’re gonna play out:

Six years ago, I interviewed UCLA law professor and WaPo legal blogger Eugene Volokh regarding the future of the tranny pronoun craze. Obama’s Justice Department had just released pro-tranny “guidelines” for U.S. schools regarding bathrooms and pronouns. So here’s what I wrote in May 2016:

I asked Volokh if he thinks it’s likely that “religious freedom” lawyers are going to claim that forcing teachers (as Obama’s guidelines do) to refer to a student by the pronoun of the student’s choice is a violation of the teacher’s religious freedom. “If a teacher claims that their religion dictates that a biological male should be referred to as ‘he,’ do you think some attorneys might try to argue that forcing such a teacher to call a male ‘she’ is, in effect, forcing that teacher to act against their beliefs?” “Definitely,” Volokh replied, “indeed.” (Several days after our back-and-forth, Volokh wrote a lengthy blog post further exploring the questionable legality of mandated pronouns.)

I made my prediction: It would end up in court on religious freedom grounds. Volokh agreed, and following our discussion he wrote a blog piece that was read by millions.

So that’s probably going to be the best line of defense against Obama’s bathroom madness. Demanding that teachers call a biologically male student “she” and “her” is essentially ordering them to adopt a faith-based belief system (a man can become a woman by wishing it so) that might conflict with their sincerely held religious beliefs, and that is very likely unconstitutional.

And guess what? A week ago, that’s exactly what happened. The 6th Circuit ruled that a professor at Shawnee State University in Ohio could not be compelled to use transgender pronouns that violate his Christian faith. The court ruled just as I predicted—a school can’t force a professor to accept tranny ideology—and the university had to give the prof nearly a half-million bucks for violating his rights.

So now I’m going to tell you where the “tranny teacher” thing is heading. It’ll end up in court, probably going all the way to SCOTUS, where the matter will be decided not on accusations of “pedo grooming.” In the end, it’s going to come down to the question of: To what extent can a teacher indoctrinate a “captive audience” in his/her own belief system?

This is being taught as fact, not as theory, not “secularly” in a “neutral” manner, but as uncontested truth, in schools across the country. It’s proselytizing, it’s indoctrination. It’s publicly funded schools forcing a belief system on children.

This will end up in court, and it’ll likely be prohibited.

You can sit there yelling “groomer” all you want. Won’t make a difference—the ending’s good as in the can.

In Garcetti v. Ceballos (2006), SCOTUS ruled that public employees do not have First Amendment free speech protections when acting in their official capacity. Garcetti didn’t specifically apply to schools, but subsequent rulings have indicated that SCOTUS applies Garcetti to public K–12 teachers (but not to university professors).

As the 6th Circuit ruled in Evans-Marshall v. Tipp City School District (2010), “The First Amendment does not extend to the in-class curricular speech of teachers in primary and secondary schools.” SCOTUS denied certiorari, an indication that SCOTUS does apply Garcetti to K–12.

In 2007 the 7th Circuit ruled that an Indiana teacher did not have her rights violated when she was fired for telling her students that peace is better than war and that she once “honked” when passing a “honk for peace” anti–Iraq War demonstration. The 7th Circuit stressed that elementary school kids are a “captive audience,” and teachers don’t have a First Amendment right to proselytize on the job.

As summarized by the University of Louisiana’s Professor Richard Fossey, K–12 teachers “are not protected by the First Amendment, even when they are engaging in pedagogical speech to their students.”

To be clear, the above-cited cases involved disputes between teachers and school districts, not teachers and parents. All the more reason for rightists to focus on taking control of school boards.

What troubles me is the conflation I’m seeing among fired-up rightists in which people who uncompromisingly oppose in-school tranny propagandizing but who also, at the same time, don’t think screaming about pedo cabals is an effective way to fight back are being lumped in with Con Inc. defeatist submissives who demand politeness and decorum as if the battle weren’t existential.

It’s not defeatist to counsel, as I have, that not every dilemma is best solved by shouting “#FUCKYOUWARWARWAR!” and charging in with a flawed battle plan.

It’s like none of you learned from 1/6, a failure of such mammoth proportions, rightists now claim the whole thing was an FBI entrapment plot. Okay, if that’s accurate, how did the FBI know how to so effectively “entrap” rightists?

Maybe because some of you are so predictable. Given the choice between a blind, emotionally satisfying, but not well-thought-out frontal assault on one hand and a well-contemplated strategic approach on the other, you’ll instinctively choose the former while dismissing the latter as defeatist.

Sometimes charging in like a rage-blinded bull isn’t the answer. Pointing this out doesn’t make someone a “cuck.”

That’s not to say there isn’t genuine defeatism among “respectable” conservatives regarding tranny propagandizing. There are the National Review types demanding propriety; heaven forbid Ron DeSantis might come off as “vengeful” or “abrasive” (perish the notion).

The defeatists are defined by unclarity of thought. Take the Daily Wire’s Jeremy Boreing, arguably the most intellectually shallow, meritlessly narcissistic person I’ve ever known. Boreing describes DeSantis’ revocation of Disney’s exclusive government-given perks as an attack on “freedom of speech.” Yet at the same time, Boreing calls tranny propagandizing in schools “child abuse.”

Granted, criticizing Boreing is as easy as shooting the bad toupee off a barrel fish. But it’s important to note his contradiction. If tranny propagandizing is actual child abuse, and if Disney has pledged (as it has) to overturn the law banning such propagandizing, then this is not a fight over speech. Disney’s advocating an actual crime (child abuse), so the “retaliation” isn’t based on speech but on removing favored status from a company trying to legalize child abuse.

If Boreing genuinely believes that the propagandizing is “child abuse” in the legal sense, then Disney’s pledge to overturn the law banning it becomes a public safety issue, not a “free speech” one.

Both extremes of the rightist reaction to tranny propagandizing miss the boat. The milquetoasts like Boreing who want to appear as noble “free speech” constitutionalists, and the gung ho “warwarwar” proponents of overarching pedo cabal theories, are pursuing flawed strategies.

The “pedo cabal” strategy is a dead end because you can’t prove it in court, and these culture war controversies inevitably end up in court (tranny activists are prepping for that as we speak, as are the race hustlers protesting the Texas anti-CRT law). Yes, I know you can “see” the cabal. It’s real to you. Just like Sidney Powell’s kraken conspiracies were real to you. But never mistake what’s real in your mind for what can be proven in accordance with evidentiary rules in a court of law.

More to the point, you may hate to hear this, but arguing that tranny propagandizing is “sexual abuse” in the criminal sense (and on that count the “groomer sayers” and Boreing are in agreement) will not pass legal muster. But the good news is, it doesn’t have to. In the words of Professor Fossey, “Teachers have no constitutional right to make lewd or profane remarks to students or to express their religious views in the classroom. Courts seem particularly hostile to classroom behavior that is sexual in nature. Courts are often willing to sanction teachers for such behavior, whether or not it rises to the level of sexual harassment or sexual molestation” (emphasis mine).

The “pedo molesters” argument against tranny propagandizing is not only a dead end, it’s unnecessary.

On the other extreme, the establishment neocons who demand civility as these are “free speech” issues should ask themselves how they’d respond if Muslims or other anti-Zionists demanded the right to propagandize unchallenged in publicly funded K–12 classrooms.

I don’t think you’d hear much rhetorical restraint from them were that the case.

When the Jonah Goldbergs and Jeremy Boreings go on about how Disney should not be sanctioned by having its perks revoked and rightists should not find themselves on the wrong side of “free speech” debates, please don’t mistake them for people like me. I’m against the “pedo groomer” approach because it works as neither a legal strategy nor a political one.

I’m not advocating “going soft” on the tranny ideologues and their enablers; I’m saying that sometimes “going hard” isn’t about shouting and Hulk-smashing (1/6 was “going hard” personified, and what did it get you?). Going hard is about defeating the bad guys, and that’s not always done by yelling, even if yelling makes us feel really, really good inside.

So sure, scream “groomer” to your heart’s content. Just don’t do it at the expense of what will actually work: seizing control of school boards and mounting legal challenges.