Glitter From the Gutter 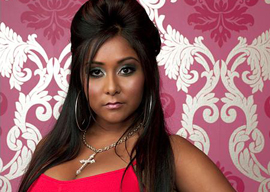 Not much is happening in the celebrity gutter this week unless you count the big pregnancy rumors from Snooki of Jersey Shore fame. Her boyfriend Jionni (nice spelling) LaValle is the baby-daddy-to-be, and her ex-boyfriend Emilio Masella told TMZ he hopes she miscarries because the Snook isn”t ready for motherhood. God knows he’s probably right, but maybe a baby is what Snooki needs to turn her silly reality spin-off show into a goldmine for MTV. It would certainly be funnier than Teen Mom. Picture Snooki in leopard-print leggings, stripper heels, a baby in one hand, and a drink in the other. Tawk abouda gut-busta!

Uma Thurman is also said to be pregnant with her third child. Thurman has two children with actor Ethan Hawke and is expecting the third with Arki Busson, a European financier socialite who has two kids from his previous marriage to model Elle Macpherson. Arki certainly likes the leggy blonde type. Arki and Uma have broken up several times but now they”re tied to each other for life. We wonder if she”ll move to London where Busson lives or if he”ll commute from New York and Hollywood. He’s rich, but is he rich enough to jet about on a private plane? Let’s hope so. Maybe that will keep Uma, rumored to be a real man-eater, from moving onto bigger and better prey.

“Picture Snooki in leopard-print leggings, stripper heels, a baby in one hand, and a drink in the other.”

Diane von Furstenberg‘s playboy son Alex is going to be a father again too. His longtime girlfriend Ali Kay is three months pregnant according to Page Six. Alex has several children with his ex-wife, heiress Alexandra Miller, who is currently engaged to architect Dax Miller (no relation). No word on whether Alex and Ali will marry. Von Furstenberg has a taste for the young and sweet, who often fall for his charms. And why not? He’s a prince, he’s rich, he’s handsome, and he’s charming. But he is European after all, so watch out! They”re not known to be the most faithful.

Lindsay Lohan hosted Saturday Night Live last weekend. The critics largely panned her performance but the ratings were among the season’s highest. There isn”t much to say about the show since we didn”t see it, but what’s wrong with her frozen face? The best explanation is that she has switched from one addiction to another. What’s next”Cosmetic Surgery Anonymous?