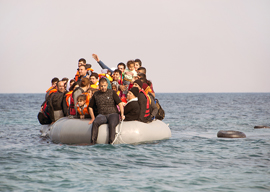 In this first installment of what will be a monthly column, we review the world migrant crisis.

From every angle that we’ve had the displeasure of examining it, the great global “refugee crisis” that started around 2011 as a result of the Syrian Civil War appears to have been deliberately foisted on First World countries by their elites as a way to force them to submit humbly to multiculturalism or risk getting beheaded at your local kebab shop.

America’s mainstream press encourages a population they largely tend to view as dumb hicks to bend over and accept their displacement. A recent article in USA Today appears to have been written by someone who has shared cherry colas with a thousand refugees but never spent a minute conversing with a member of the benighted Anglo-Saxon American working class:

The 3.2 million refugees who have come to our shores since the refugee resettlement program started in 1980 make up an important part of the American workforce. And more could do so if we let them in….Refugees everywhere want to contribute.…If you just listen to Trump, you’d think we must stop bringing in refugees because they are dangerous….But that’s simply false….Resettlement helps fill otherwise un-fillable jobs. It enables companies to find loyal employees who can maximize productivity and profits.

One can only hope that the writer of this dismal and brainwashed garbage loses his editorial position to a Somali refugee who flunked out of kindergarten.

According to UN statistics, the following nations’ populations have been uprooted and scattered elsewhere as a result of internal chaos in their homelands:

In most cases, people fled their countries of origin due to military and governmental chaos; the exception is Venezuela, which has bled a full seven percent of its population in the past four years due to a collapsing socialist economy.

That’s why we’re going to start this Refugee Roundup in South America:

SOUTH AMERICA
With the Venezuelan inflation rate forecast to hit about 1 million percent this year, there’s been a 900% increase in Venezuelan nationals living elsewhere in South America. Things are so bad that according to one Venezuelan construction worker, “I’d rather get beaten up by Brazilians than starve in Venezuela.” This sudden mass migration has been called “one of the largest population movements in Latin American history.”

Brazilian President Michel Temer is sending troops to the country’s northern border to stem the influx of Venezuelan refugees:

The problem of Venezuela is no longer one of internal politics. It is a threat to the harmony of the whole continent.

“Those beautiful Greek islands, the pearls of the Aegean, now house over 20,000 ‘refugees and migrants’ according to government statistics.”

“The problem of Venezuela” reached a boiling point recently in the northern Brazilian town of Pacaraima after 55-year-old shopkeeper Raimundo Nonato de Oliveira was beaten by four Venezuelan refugees, who tied him and his wife up and stole $5,600 from his pocket. According to Oliveira’s wife Maria, one of his assailants threatened him by saying, “We’re going to kill you, you damned Brazilian” during the assault. Oliveira required thirteen stitches in his head, claims to be in constant pain, and according to Maria, he refuses to return home.

As news of the robbery spread throughout town, Brazilians torched a local refugee camp and tossed rocks at fleeing Venezuelans. (LINKS: 1, 2, 3, 4)

GREECE
Those beautiful Greek islands, the pearls of the Aegean, now house over 20,000 “refugees and migrants” according to government statistics.

On one of the most famous of those islands—Lesbos, birthplace of simultaneous feminism and cunnilingus—a refugee detention center is being shut down due to “uncontrollable amounts of waste.”

Do we even want to think about what amount of waste you’d need for it to reach the “uncontrollable” level? No. No, we don’t. In fact, we’re sorry for even bringing it up.

The uncontrollable waste rendered conditions at a wretched tent camp, where over 8,000 scuzzy people were huddled in a camp designed for about 3,000 scuzzy people, uninhabitable for even some of the world’s scuzziest people.

According to one report, “inspectors found broken sewage pipes, overflowing garbage bins, and stagnant water and flies in the toilets.”

GERMANY
Nativist protests flared in the city of Chemnitz, when indigenous Germans took to the streets after the alleged stabbing murder of a public official at the hands of an illegal migrant. German interior minister Horst Seehofer has declared that migration is “the mother of all political problems in this country.”

ITALY
Italian Interior Minister Matteo Salvini, whose shores are being buffeted by boat people to the point where African gangs are now giving the Mafia a run for their money in Sicily, has refused to accept more boat people until they can be “distributed, in a spirit of solidarity by the EU, among the 27 countries.”

Six Tunisian fishermen are currently facing trial in Italy for helping smuggle people into the country. One of the accused, forty-five-year-old Chamseddine Ben Alì Bourassine, is reported to have rescued thousands of Africans as they made their way across water to Europe.

FRANCE
A 70-year-old ex-British navy captain and two other Britons have been jailed for attempting to smuggle a dozen Vietnamese migrants across the English Channel in a speedboat.

SPAIN
Last week Spanish authorities pulled over 500 people from a dozen boats making the illegal journey between Africa and Spain. Rescuers also plucked five dead bodies from a boat that had sunk east of the Strait of Gibraltar.

LIBYA
Amid the turmoil caused by the Obama Administration’s destabilization of Libya, refugees are being sold on slave markets for as little as $600. A group of human smugglers posing as UN agents—uniforms and all—has recently been arrested in Libya.

CZECH REPUBLIC
Anti-migrant militias are springing up in this central European nation as a result of the influx of unwanted foreigners.

If Italy and Malta won’t welcome the migrants, then Spain will. And so we’re sending the message to migrants that it’s possible to come to Europe, from Morocco via Spain. This has to stop. Otherwise we’ll never stop the migrant influx….[Refusing migrants into the Czech Republic is] a key move, a symbol and a message to migrants and migrant smugglers that it’s pointless to take a boat destined for Europe….We need to begin cooperating in a serious way to find a solution because we needlessly lost three years to an inane debate on migrant quotas.

CANADA
Nearly three-quarters of a million Rohingya Muslims have fled to Bangladesh after religious persecution in Myanmar. From there, some have fled to Canada. After receiving safe shelter in Canada, now many of the transplants are demanding that Canada bring the rest of the refugees into their country, because obviously the one thing Canada needs is more Muslims with PTSD.

In Vancouver, a 28-year-old migrant named Ibrahim Ali has been charged with the murder of a 13-year-old Chinese girl that occurred when the accused had only been in the country for three months.

KENYA
Now that European and American governments are shutting the door to refugees, Kenya, Uganda, and Tanzania are following suit. Conditions in refugee camps, already abysmal, are expected to decline further as the flow of funding slows to a leak.

JORDAN
On a per-capita basis, Jordan has been one of the countries hardest hit by the migrant crisis. Its population is a mere 9.4 million, 1.3 million of whom are recent refugees from the Syrian chaos and 2 million of whom are Palestinian refugees. The Syrian crisis alone has burdened the Jordanian public till to the tune of $10 billion.

OCEANIA
In what is undoubtedly one of the loneliest refugee stories of them all, Middle Eastern refugees find themselves stranded on Nauru Island in the South Pacific, a full 3,000 miles from their hoped-for destination, New Zealand. In fact, Nauru seems to be 3,000 miles from everywhere. Some refugees have been here in tent camps for as long as five years and have witnessed insane spectacles such as a suicidal migrant dousing himself in gasoline and setting himself ablaze. But at the moment, New Zealand is not accepting them.