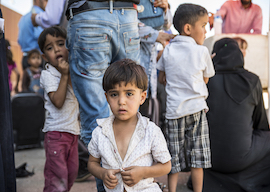 Another month brings another series of political, cultural, and demographic catastrophes for a planet which strains under the weight of its own well-intentioned but deadly naiveté.

Despite the impenitently leftist mainstream media’s insistence that the short brown hordes headed like ants to America’s southern border are refugees seeking shelter from intolerable domestic conditions, a new report from the Pew Research Center puts lie to this claim. It says the overwhelming majority of so-called “refugees” headed north are instead garden-variety illegal immigrants looking for a vastly better economic deal than is available in their dysfunctional and outright failed countries of origin. On average, the US economy offers wages that are ten to twelve times higher than the peanuts offered to the hapless laborers in nations near the Equator.

While we constantly hear that the huddled masses are coming here for a “better life,” we never hear that the inescapable inference one can draw from this statement is that they’re fleeing nations that offer a crappy life.

ENGLAND
It takes only one viral clip of an outrageous event to win hearts and shift public policy. Open-borders apologists in England were just handed a golden egg on a silver platter in the form of a short clip filmed showing a 15-year-old male Syrian refugee being bullied by a 16-year-old indigenous Briton.

The 25-second clip shows a teenaged British male who is a head taller than his victim approaching the Syrian boy, tackling him, and forcibly pouring water into his mouth while saying, “I’ll drown ya, you little bastard. I’ll drown you!” Other students watch the attack happen without intervening. At the end of the clip, the victim is shown standing up and quietly walking away.

The incident occurred on Oct. 25 at a school in the northern English town of Huddersfield. The same boy had his wrist in a cast at the time of the attack, as he was previously injured on Oct. 7 in what appears to be a separate bullying event.

According to Superintendent Steve Dodds of West Yorkshire Police:

We are investigating a report of a racially-aggravated assault of a 15-year-old boy which occurred on playing fields at Almondbury Community School at about 1pm on October 25…A 16-year-old boy has been interviewed by voluntary attendance in connection with the incident and we are continuing to progress the investigation.

As of this writing, the video of the incident has been viewed over 12 million times. Crowdfunding efforts in support of the victim have raised more than $200,000, which, let’s be honest, isn’t bad for putting up with a micro-waterboarding. We’d eagerly endure one for half the price.

CANADA
If strong survival instincts equal intelligence, Canada is easily the dumbest nation in the Western Hemisphere. Because Canadians apparently don’t realize that all the diversity they’re wishing upon America will soon leak over its porous borders, what was once a nation of rugged European pioneers is suffering the demographic equivalent of a slow cyanide drip.

“There are reports of Uighurs in Chinese camps being set on fire while alive in cages.”

Since February of 2017, an estimated 37,000 wannabe refugees have walked unhindered across the US-Canadian border, largely at crossings between New York State and the province of Quebec. Many of these people who are just seekin’ a better life come from such shimmering examples of progress and prosperity as Haiti, Nigeria, and Somalia.

Apparently deluded that it will benefit them at some misty, foggy, murky, undefined point in the far distant future, Toronto’s citizens have forked over more than $50 million over the past two years merely to shelter hostile and ungrateful asylum-seekers in the city’s hotels.

FINLAND
By all known indices, Finland is one of the most cohesive, prosperous, educated, and peaceful nations on the planet, so naturally this problem needs to be remedied.

A new report from a non-profit agency declares that thousands of refugee children to Finland require psychiatric help. Some of them are alleged to suffer from insomnia, depression, and feelings of alienation. This is clearly the fault of indigenous Finns.

Apparently, in addition to the free food, housing, and medical care, refugees also need headshrinkers to poke around inside their skulls in order to recommend how to make them happier.

How the average Finnish taxpayer feels about this arrangement is irrelevant. We have established beyond all doubt that the feelings, and even the fundamental happiness, of indigenous Europeans are racist at their core and must be condemned out of hand.

ITALY
Italian Interior Minister Matteo Salvini is hell-bent on competing with Hungary’s Viktor Orban for the title of Ballsiest National Leader on the European continent.

A new bill introduced by Salvini has faced what is described as “fierce criticism from the left.” Showing a Trump-like level of disdain for the media, Salvini shrugged off “left-wingers who think illegal immigration is not a problem.”

In place of two-year “humanitarian protection” residency permits, new permits will face a limit of one year or six months, and under much stricter residency requirements such as “natural disaster in country of origin.” The bill also strips all migrants of Italian citizenship if they’ve been convicted of terrorism. It’s a wonder that wasn’t already part of the law.

BANGLADESH
A massive refugee tent camp estimated to hold anywhere from a quarter-million to a half-million Rohingya Muslims has proved to be an inconvenient barrier for Asian elephants who’ve crossed the same forest paths from Myanmar to Bangladesh for millennia.

Fleeing what the UN called “a textbook case of ethnic cleansing” at the hands of the Chinese, scores of Muslims started heading toward southeastern Bangladesh in mid-2017. Yet the camps they settled happened to be right along eight separate elephant “migration corridors.”

In the ensuing hubbub, elephants have killed at least 13 people, and sadly two elephants perished after stepping on landmines.

An “elephant response team” of 550 or so Rohingya Muslims act as constant lookouts for encroaching elephants as they guard 98 watchtowers along the refugee camps. Since March of this year, they claim to have prevented 28 elephants from entering the camps by using floodlights and noise distractions.

LIBYA
Moammar Qadaffi warned the West that if they were to overthrow him, the last remaining steadfast immigration barrier between Africa and Europe would be removed and Europe would rapidly become black. We are watching this process happen before our eyes.

Writing under a pseudonym for The Guardian, a would-be European migrant whose attempt to cross the Mediterranean from Africa to Italy was thwarted by Italian police describes the horrors of life in a Libyan refugee camp:

The place we are living in is like a cave. There are no windows. There is no fresh air. We share beds, cups, almost everything. To pass time we pray in the morning. We sit. We sleep. It’s dark inside all day….Two weeks ago, a Somali man killed himself by taking petrol from a generator and setting himself on fire…. It feels like EU countries don’t want African people to develop, be smart, educated and so on. That’s why they are doing this. They are killing our time, killing our brains. It’s like the cold war. Our conditions just get worse and worse. There’s not enough food, and people drink toilet water.

What’s horrifying to ponder is the idea that all of Europe will one day…possibly one day soon…resemble that Libyan refugee camp.

CHINA
For a mainstream press that seems to shed every available crocodile tear at the imagined sorry plight of Muslims in the West, you hardly hear a peep about Muslims’ much more brutal treatment by the Chinese.

During a get-together at the National Press Club in DC, a 29-year-old female Uighur Muslim spoke of the atrocities she endured as a religious and ethnic minority in a Chinese reeducation camp, AKA an “ethnic unity training center.”

She spoke of having her head shaved and of being grilled by Chinese police for four days straight without a wink of sleep. She was forced to learn Chinese and to renounce her religion and culture. She was also forced, under threat of torture, to memorize and sing songs praising the Communist Party. She says she received electroshock therapy torture until she foamed at the mouth and lost consciousness—and the last thing she remembers saying before passing out is “Being a Uighur is a crime.”

She claims that before being captured and placed in the camp, she was separated from her infant triplets. One eventually died and the other two had mysterious operations performed on them. She also says that women at the camp were forced to drink an unidentified milky liquid that disrupted their menstrual cycles and caused bleeding.

There are reports of Uighurs in Chinese camps being set on fire while alive in cages. The estimated number of Uighurs in such camps hovers around two million.

MEXICO
In what is undoubtedly the Global Refugee Blooper of the Month, a female Guatemalan migrant was impaled on metal bars after attempting to climb a fence at a border crossing between Mexico and San Ysidro, California. The metal pierced the woman in her side, torso, and buttock. She is expected to survive—but not in the United States.

A representative for Customs and Border Protection rubbed salt in the woman’s wounds thusly:

Entering our country illegally, particularly over our walls is not only dangerous, but also very foolish. This woman placed her own life and her children’s lives in peril.

Border Patrol agents also faced fierce criticism after it was revealed that they recently tear-gassed a cluster of predominately Honduran migrants attempting to cross from Tijuana into the USA.

That sounds awful, but would they have been tear-gassed if they weren’t trying to break the law? Not bloody likely!