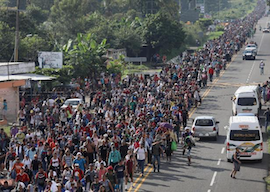 In an ominous, landlocked, real-life version of the dystopian novel The Camp of the Saints, the refugees are coming en masse. They started as a group of 160. Within days there were ten times as many. As of this writing, an estimated 14,000 Central American migrants are walking in a caravan that started in Honduras and intends to illegally cross the US/Mexico border in Texas.

Honduras is a country of 9.4 million people. For the past few years it has had one of the world’s highest homicide rates. About two thirds of its residents make about $2 per day. They’re coming to America for a better life, but are they bringing a far worse life along with them?

On October 12, Vice President Mike Pence urged the presidents of El Salvador, Guatemala, and Honduras—three of the world’s most violent nations—to urge their citizens to stay put:

Tell your people: Don’t put your families at risk by taking the dangerous journey north to attempt to enter the United States illegally.

The caravan formed the next day and began heading north to attempt to enter the United States illegally.

According to some reports, the caravan was organized by a “human rights group” named Pueblo Sin Fronteras, which apparently doesn’t recognize the rights of humans in the United States not to pay for unwanted interlopers. Rodrigo Abeja, a member of the group, denies their role in arranging the caravan: “The organizer of this caravan is number one hunger, two death.”

Abeja acknowledges that Republicans are using images of this looming brown wave of scofflaws as PR for the upcoming midterm elections, but he doesn’t care about drunken white people who watch TV:

It’s more important to accompany the caravan…than worry about white voters, sitting in front of their TVs drinking beer.

Did you hear that, white voters? Peel yourself away from your TVs on November 6 and make sure to vote.

TURKEY
A bus carrying migrants in the western province of Izmir swerved to avoid another vehicle and plunged 65 feet into an irrigation canal, killing 22—including two children, two babies, and a pregnant woman—and injuring 13 others. Many Turkish migrants are headed to Greece and elsewhere in Europe to culturally enrich people and, hopefully, open spicy new restaurants.

SPAIN
Spain—which has become a refugee dumping ground ever since other European nations such as Hungary and Italy got wise and started rejecting them—is now pleading with the EU to give more financial aid to Morocco so bloodthirsty African Muslims who are aided across the Mediterranean by criminal syndicates don’t bankrupt their country. In October the EU tossed $275 million to Morocco to keep Moroccans in Morocco, but apparently it’s not nearly enough. Moroccan officials say that in 2017, they prevented 65,000 migrants from sailing toward Europe but claim they need more money to stanch the flow.

“They’re coming to America for a better life, but are they bringing a far worse life along with them?”

ISRAEL
Unlike most countries across the globe—in fact, nearly all others—Israel is an ethnostate that reserves the right to decide who’s Jewish and who isn’t. The Ethiopian Falashmura community claim to be Jewish, but the Israeli government says, “Nah,” meaning they have no right under the Law of Return to just sashay into the volatile little New Jersey-sized Middle Eastern ethnostate. As a compromise, a way of throwing these African Jews a bone, the Israeli government recently approved a plan to bring 1,000 Falashmurans to Israel out of a grand total of 8,000. These 1,000 people already have relatives in Israel. Meanwhile, the 7,000 Falashmurans who remain in Ethiopia will be forced to eat rocks and swat at flies all the livelong day.

UNITED STATES
A glowing newspaper profile of refugees—is there any other kind of newspaper profile of refugees in the modern American mainstream press?—says a massive holding facility of minors in the Texas town of Tornillo often resembles a “giant slumber party” with “Flowers made of plastic bottles, chains of colorful construction paper and pictures of Disney princesses stripped from coloring books.”

Yet another glowing newspaper profile concerns American designer Anna Meddaugh, who has designed a “personal urinal that women in refugee camps can use in shelters at night to avoid the threat of sexual violence outside.” She calls it the “Night Loo” and touts it as a safe alternative for women and girls in refugee camps who want to pee at night but are afraid of being raped if they dared venture out to the Port-A-Pottys:

The circumstances within refugee camps can lead to unimaginable choices, having to weigh the likelihood of getting attacked and raped while making your way to the toilet, versus suffering through the night or possibly even soiling yourself….Imagine being faced with this choice every night.

Hey, as stark as it sounds, at least they have a choice. American citizens, at least for the time being, have no choice but to accept refugees.

MOROCCO
Apparently there’s a huge business in trafficking Moroccan migrants across the Mediterranean on speedboats headed for Spain.

In one incident last month, the Moroccan Royal Navy fired at one of these speedboats and killed one student and wounded three others.

In a separate incident, a 16-year-old boy was wounded in the shoulder after the Moroccan Royal Navy fired at a speedboat containing more than 50 illegal immigrants. According to one source, “the suspicious motorboat that was carrying 58 migrants hidden under tarpaulin made a hostile maneuver which significantly threatened the safety of the navy team and forced them to fire a shot to immobilize it.”

It’s a pity that none of these migrants will make it to Spain and start raping people.

ITALY
In the northern Italian town of Legnago, “an inebriated Moroccan migrant” commandeered a bus and led police on a miles-long chase, crashing into parked cars, fire hydrants, and even scraping a few houses along the way. He was finally stopped by a blockade as he smashed straight into a parked police car, which then smashed into another nearby car. One woman and four police were injured in the crash. The Moroccan is being charged with attempted murder, property damage, resistance of arrest, and aggravated injuries to a public official. He has previous convictions for brawling, theft, and vandalism. Only half an hour before his rampage, he had been arrested for public intoxication but had been set loose by hapless and clueless officials.

AUSTRALIA
The Australian government has produced ads in Portuguese and Spanish throughout Latin America telling would-be migrants “There is a place for you in Melbourne.” According to Victorian Minister for Small Business, Innovation and Trade Philip Dalidakis, the campaign was launched because Donald Trump is a big fat meanie:

The reason we started this campaign … is because of the Trump administration, because of the very negative connotation that President Trump has had in many countries…. When you treat people with disrespect…I’m only too happy to extend the hand of friendship to Mexicans to demonstrate the opportunities that they would have here in Australia, but more importantly in Victoria, be in through international education, or through export markets.

Mr. Dalidakis, you deserve to be treated with disrespect.

GREECE
A bus accident in northern Greece recently collided head-on with another vehicle, bursting into flames and killing 11 migrants. As in the aforementioned Turkish bus crash, the driver escaped without major injuries.

In Thessaloniki, hundreds of illegal migrants, most from Iraq and Iran, have lined up in front of a police station, seeking to be arrested so that they can file asylum applications. Whereas they had mostly been content during the summer to sleep in public parks, winter weather is approaching.

A doctor who visited a Syrian refugee camp on the Isle of Lesbos describes the horrors he saw:

There’s no hope left. They’re hopeless. The despair is so thick you can cut it with a knife. “At night it’s like living in a dystopian novel. The residents are terrified. At night, the violence begins….Every day they would bring in kids who’d cut themselves. Classic cutting to relieve anxiety….This is what happens when you lose all hope and you’ve got so much pain inside.

JAPAN
The Japanese, who have one of the world’s strictest immigration policies and don’t seem to care what people call them as a result, have finally caved to international pressure.

They have promised that by the year 2020, they will double the number of refugees they accept.

In that year, they promise to take in a whopping grand total of sixty refugees.

Would that everyone was as wise as the Japanese.