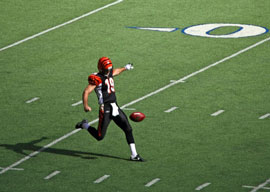 Thirty years or so ago, I wrote an article about a mugging in New York’s Central Park, one that today would have got me arrested for breaching PC rules, but back then was overlooked by the Ministry of Truth, its Gestapo agents busy looking under our beds for anti-communists.

A New York councilman, Andrew Stein, had been mugged by three black thugs and had his very expensive Rolex watch stolen. Otherwise he was unharmed. Andy Stein is now a friend, but back then our politics differed. Andy wears a toupee, so I took the opportunity to point out how our black brothers are not too shifty upstairs because they settled for a $2,000 watch but ignored a $10,000 toupee.

A cheap shot, of course, but I only thought of it this week when a dude called Vontaze Burfict”who are these female geniuses who dream up such tongue-twisting first names?”sank his team, the Cincinnati Bengals, by committing a personal foul that perhaps a 5-year-old would have committed, a 5-year-old with a mental age of 1, that is.

Let’s take it from the top: The Cincinnati Bengals are playing a postseason wild-card game against their traditional nearby rivals, the Pittsburgh Steelers. The Bengals are a very good team that was hoping to end a losing streak that had seen them drop seven in all, and five in five seasons” postgames. For Takimag’s American readers, the following will be as easy as pie. For the rest of you, it might sound like a democratic Saudi Arabian pronouncement. The Bengals are up 16 to 15, and are in possession with just about a minute to go, close to Pittsburgh’s goal line. All they have to do is take a couple of knees and they”re in the playoffs for the first time in 26 years. So what do they do? They hand off the ball, the runner fumbles, and the Steelers recover.

“My unsolicited advice to Cincinnati is that after drafting a player with speed and strength, they should also measure his brainpower.”

But it’s still a hundred-to-one shot. The Pittsburgh quarterback throws and connects with two passes, but they”re still nowhere near the Bengals” goal. Then Pittsburgh tries a long pass that goes way over the heads of everyone. The game’s just about over. That’s when a genius of a man, our old friend Vontaze, decides to spear the quarterback with his helmet, knocking Ben Roethlisberger down with an illegal head shot. A 15-yard penalty moves Pittsburgh closer, but still out of range for a field goal. A Steeler coach comes running in to see if his quarterback is still alive, and another Bengal clocks him also. Another 15-yard penalty for unsportsmanlike conduct moves Pittsburgh in closer. They kick a field goal and win the game as the clock runs out.

My unsolicited advice to Cincinnati is that after drafting a player with speed and strength, they should also measure his brainpower. Modern American football drafts college grads every year, rating only their ability to hit or be hit. African-American players dominate the National Football League. They are exceptionally tough players, but at times they commit infractions that kindergarten children do not. They”re called boneheaded plays, and Vontaze is the perfect example.

Once upon a time, a football tackle consisted of wrapping one’s arms around the waist or legs of an opponent with the ball and bringing him down. Modern football rarely sees an old-fashioned tackle. Spearing people with a helmet-to-helmet hit is now the order of the day. No wonder most players are consistently concussed and scrambled brains see many veterans suffer from depression that leads to suicide.

When pro football was enjoying its golden period, the “50s and “60s, players not only were college graduates, they also had actually opened and studied books. Now opening a book or attending classes has gone the way of spats and high-button shoes. Some pro football players can hardly write their John Hancocks on their multimillion-dollar contracts. Yet football remains the undisputed king of all sports in the Land of the Freebie. My suggestion is that before he leaves office, Obama should appoint his fellow African-American Vontaze as ambassador to Saudi Arabia. With Vontaze over there, we just might be able to get rid of our “allies,” those camel drivers posing as princes who have been financing ISIS all along. Go, Vontaze!