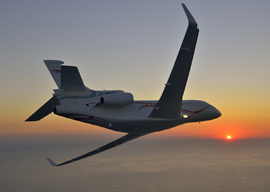 MARSHALL, Tex.—The most frightening thing about Jesse Duplantis is that I think he truly believes what he’s saying.

(Quick digression: As recently as the ’50s, anyone claiming to get messages from God was immediately booked into the Rusk State Hospital for the Feeble-Minded. Today these guys get international TV shows.)

By this time you’ve probably heard about Jesse’s appeal for help in granting God’s wish that he start using a Falcon 7X corporate jet for church business. His three previous multimillion-dollar jets have proved inadequate for the spreading of the Prosperity Gospel because their range requires Jesse to stop and refuel, thereby wasting God’s valuable time. Jesse’s video went viral and attracted all kinds of attention from the secular press.

But that’s the second-most frightening thing about this story—that it’s being treated by the media like a weird aberration. Get a load of this yahoo in southern Louisiana—can you believe what he just said?

When actually, they say this stuff all the time. All these Prosperity Gospel guys do. What’s remarkable is that this particular comment got noticed.

There are 1,700 hours of American-based religious programming per week, much of it beamed by satellite into countries like Iran and Nigeria that have large populations struggling to break away from cycles of poverty and violence. The preaching is loud, charismatic—the more primitive the audience, the more tongue-talking you get—and, above all, focused:

God will make you rich.

Jesus will help you get material rewards.

The Almighty wants to reward the Faithful.

“We treat these guys as jokes when they’re bringing misery into the world on a massive scale.”

It’s that third line that grabs the money for Jesse’s jet. God is ready to give you everything you want, but only if you believe.

What? You prayed for a new pickup and it never came? You must not have prayed hard enough.

What? You prayed for your daughter to be healed but she’s still sick after a year? There must be some lack of faith in your family, some doubts that are getting in God’s way.

Widows and orphans are mentioned repeatedly in both the Jewish Bible and the Christian expansion of it. A widow is anyone who has lost her family—it doesn’t just mean women, and it doesn’t just mean previously married people. An orphan is someone who never had a family in the first place.

So why are we supposed to take care of these people? Because they don’t have any emotional resources. They’re adrift in conditions of sadness and misery and loneliness. They need protection—from guys like Jesse Duplantis.

So what they do is they stay up late watching the nonstop Prosperity Gospel infomercials that pass as “ministries” and then they call the Prayer Line and they talk to a counselor who mines their personal data and gets a credit card number or a checking account number and makes notes like “In grief about her deceased brother—2015” and then the lonely person supposedly gets put on a Prayer List so that the televangelist, who is too busy to come to the phone, promises to talk to God about this person’s problems. Meanwhile the data is being massaged for ongoing contributions, sold to other televangelist organizations, and used to engender fake “personal notes” from whatever preacher the person wants to hear from.

If there’s any sign that we’re living in the End Times, it’s this: We’ve monetized and commodified and turned into a corporate business the Fleecing of Widows and Orphans.

“If Jesus came back today, I don’t think he’d be riding on a donkey!” crows Jesse Duplantis. And he means it. And he thinks he’s being profound.

But why do these guys need jets? They all have them. In fact, it’s not uncommon for their churches to be built next door to a private airstrip.

They need jets for the same reason they need isolated locations for their churches, which are really elaborate television studios. Jesse Duplantis’ “church” is in Destrehan, an upscale suburb of New Orleans, where he lives in a church-funded mansion. Kenneth Copeland’s “church” is in Newark, Texas, a lakeside exurb of Fort Worth.