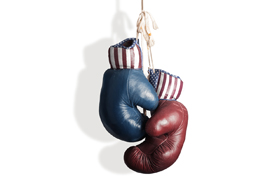 “Invent a weapon,” Jordan Peterson said on Tuesday, “and your enemies will have it within one generation.” He was talking about Gamergate feminist Brianna Wu, who was learning the hard way that YouTube’s Restricted Mode was hurting the gays it was supposed to protect. You may be thinking, “Wu who?” right now, but you should be saying, “Woo-hoo!” because Peterson’s observation is profound. Not only are the bots turning on their creators, we are too. We”ve taken Saul Alinsky’s Rules for Radicals and turned it into our guidebook. We are the Social Justice Warriors now, and we”re way better at it than they ever were.

Right now, a man in a MAGA hat is suing a bar in New York called The Happiest Hour for booting him out solely because he loves Trump. Getting kicked out of bars is pretty common for people in MAGA hats above the Mason”Dixon line. The old right would venerate the entrepreneur and quietly take the high road out of the bar. Not anymore. Since the lawsuit was announced, Trump supporters have been flooding the bar. One MAGA woman was just paid $150 to get lost.

The new right wing does more than just get petty when the going gets rough. We appropriate. When you attack us, we turn it into a slogan. Hillary’s “basket of deplorables“ made us into The Deplorables. Her “fake news“ now defines all the news that lies about us. We even got her freaking out about a green frog. Since then, we”ve convinced them that everything from an “OK“ gesture to a bobbing purple dove to a glass of milk is a secret Nazi code. It’s so easy to turn them into a dizzy Chihuahua frantically chasing his own tail that it’s almost cruel”almost.

“The new right wing does more than just get petty when the going gets rough. We appropriate.”

When they come up with some kind of art project to protest Trump, we make it our own. When State Street Global Advisors put up a statue facing the Wall Street bull called “Fearless Girl“ to encourage finance companies to hire more women, we started humping it. When that made the feminists furious, we put a MAGA hat on the girl and wrapped her in an American flag. Today the statue has become “a monument to the suicidal hubris of modern women and their inability to discern their actual abilities vs. their inflated egos.”

We did the exact same thing to Shia LaBeouf’s “He Will Not Divide Us” art installation. Every time he puts it up, we show up in MAGA hats and sing stupid songs until the Moonies chanting, “He will not divide us” have a nervous breakdown. Shia became so apoplectic about the direction it took, the police had to take him away. What was meant to be a symbol of resistance to the Trump movement has gone down in history as the exact opposite.

There are times I think we go a little too far down the SJW rabbit hole. I didn”t like trying to get Samantha Bee fired for saying someone had a Nazi haircut, but I understand where they were coming from. Similarly, calling the horror movie Get Out racist against whites seemed a bit much, but maybe I was wrong. Attacking MTV for their “2017 Resolutions for White Guys” got it taken down and Dear White People started with 184,068 dislikes on YouTube and evolved into a Netflix boycott.

When George Takei put up an online poll asking, “Who do you think does MORE HARM to the American people?” with “The “Unfair” News Media” and “Trump” as options, we hijacked it with votes for the media until he was forced to take it down. Amy Schumer has been burning right-wing bridges for years. Despite making her bones on Fox News and Opie & Anthony, she decided to pretend it was all a joke and claimed, “I got famous by playing a racist white Republican.” In her new special, she attacks gun owners and says the laws are way too lenient. So, we bombarded the Netflix reviews with an endless barrage of one-star ratings until the company announced they will be abandoning ratings entirely. Netflix is rewarding our juvenile SJW behavior with positive results, so why stop? Shannon Coulter started a boycott where she harassed vendors who sold Ivanka goods. As soon as we heard she was gaining traction, we attacked Nordstrom and began buying her products online. Today, Nordstrom is suffering and Ivanka had the best year she’s ever had. This is fun. They used to get us fired. Now James O”Keefe is picking them off like ducks.

This is the part of the article where we begin to get what editors call “example exhaustion,” but I”m still not tired of winning. When Kyle Chapman was maced at a recent pro-Trump rally, he reached into his bag and grabbed the gas mask he had packed for that very occasion. Then he put on a helmet, grabbed a stick, and started bashing the “antifascists” who had just attacked him. What could have been yet another example of lunatics abusing us with no repercussions blossomed into an inspiring meme where #BasedStickMan is Photoshopped into countless heroic situations. I”m told by the organizer of that rally he was inspired by the Proud Boys charging headfirst into my NYU talk and pounding the crap out of the masked anarchists who pepper-sprayed me. We were told to take the back door, but we refused because we”re done with being ashamed. The Deploraball that happened a few weeks before this was another example of us stealing back the culture, and I”m not just talking about the name. When some kid in a ski mask said, “You wanna go?” I said, “Yeah, I do wanna fucking go” and punched him in the face. “Conservative men never punch people in the face,” Ann Coulter told me after she heard the story. She was thrilled. Living under “the tyranny of clichÃ©s“ is really just being bullied by betas and I”m almost embarrassed it took us so long to stoop to their level.