Goddammit, Don, Too Soon. Too Soon. 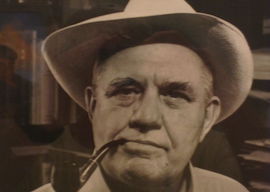 PHOENIX—The last time I saw Don Graham, we were talking about all the Canadian students at the University of Texas who come down to Austin and “don’t know who Dobie is—I have to tell ’em who Dobie is.”

He was speaking, of course, of J. Frank Dobie, the father of Texas letters, the creator of the famous Life and Literature of the Southwest course at the university, a course inherited by Don sometime in the ’70s and taught right up until his death last week. They’re burying Don in the Texas State Cemetery tomorrow alongside 14 governors, 15 signers of the Texas Declaration of Independence, 28 veterans of the Battle of San Jacinto, Republic of Texas founder Stephen F. Austin, one member of the Baseball Hall of Fame, one astronaut—and J. Frank Dobie.

I would have expected Don’s body to be carried back to the deep black soil of Collin County where he picked cotton as a boy—except the deep black soil of Collin County has been paved over with condos and housing developments and corporate campuses as part of the endless urban sprawl north from Dallas. Don belongs in the State Cemetery—our little hardscrabble version of Westminster Abbey—because he was the latest, and possibly last, avatar of a literary tradition found only on frontiers and in wide-open spaces. J. Frank Dobie had been a cattle rancher and outdoorsman who was also an Ivy League-trained writer, giving a literary voice to people from the early days of the Southwest who were mostly illiterate. Don was a brilliant professor with a pop culture sensibility, able to bring references from Yeats and García Márquez into a discussion of the Western novels of Zane Grey. Perhaps that’s why he was the perfect occupant of what was called “the Dobie chair” at the University of Texas English Department. He was undoubtedly the last member of that department to wear cowboy boots to work every day. Post-structuralists don’t wear ostrich-skin.

The reason I associate Zane Grey with Don is that he was the subject of one of several idiosyncratic conversations the two of us had over the years—sometimes in person, more often via email—because we both enjoyed going into politically incorrect minefields.

“Why did Zane Grey hate the Mormons so much?” I had asked.

“Well, look at what they did,” answered Don, succinctly reducing the debate over Mormon atrocities to a matter of mere degree.

“He was undoubtedly the last member of the University of Texas English Department to wear cowboy boots to work every day.”

At one point Don and I staged a fairly elaborate multimedia presentation together at Tarleton State University in Stephenville, Texas. The subject was “Texas in the Movies,” and we had dueling podiums and kind of went back and forth about grindhouse fare vs. “elevated” films in the state’s history. It was Don who got me to go back and watch Lonesome Dove after he made the fairly astonishing assertion that the greatest adaptation of a Larry McMurtry work was not Hud or The Last Picture Show or Terms of Endearment, but the CBS miniseries starring Robert Duvall and Tommy Lee Jones. We both agreed that the most iconic Texas film was George Stevens’ adaptation of Edna Ferber’s Giant in 1956, and Don’s final work, released last year, was the definitive history of the making of Giant. (I reviewed the book in these pages.) We disagreed about the greatest Texas Western—I voted for Red River, Don favored The Searchers—but we both agreed that John Wayne was only at his best when playing an asshole. The presentation was so well received that we planned to do it at other universities—but never did. Years later I reminded Don that we never followed up with our Texas Movie Tour and he said, “Yeah, and why did we do it at Tarleton State?”

“Because you can major in rodeo at Tarleton State. Those are your people.”

Which was true. The reason Don resented those Canadian students coming down to Texas without any J. Frank Dobie background was that anyone who grew up on a prairie should have read Dobie’s essays on rattlesnakes and cowboy poets. (For those of you not familiar with a cowboy poet, that’s a ranch hand able to rhyme more or less spontaneously like a rapper. My grandmother was eulogized by her cowboy-poet brother, who was in his 90s at the time, but when the attendees at the funeral asked him for a copy of the poem later, he said, “Nope. That was a one-time deal. That was for Thelma.”) Besides being an authority on Texas literature, Don knew more about Australian literature than most Australians—he obviously found a symbiosis between the Outback and the Staked Plains.

Specializing in the literature of a forsaken place like the American Southwest can be a lonely pursuit akin to becoming an expert on the wines of Latvia, but Don not only knew all the players in English, he knew all the players in Spanish. I don’t think his own Spanish was very sharp, but he had a keen awareness of the role Spain and Mexico played in the makeup of the Texas worldview as defined by Walter Prescott Webb’s The Great Frontier. There was a time not long ago when the word “frontier” had the universal meaning of “a place where one culture ends and the next begins.” It’s still used this way in, say, Switzerland. It took a handful of literary scholars at the University of Texas in the early part of the 20th century to change that perception to the way we see the frontier today, as the blank slate where cultures collide, commingle, and coexist. Don edited more anthologies and wrote more introductions than any man I know, and he loved to say, “Now, here is something you would never expect to see coming out of Texas,” whether that’s the middle years of Cormac McCarthy, the feminist criticism of Gloria Anzaldúa, or Thomas Thompson’s Blood and Money. In a place founded mostly by people fleeing the institutions of Europe and the eastern seaboard of America, you end up with a fluid definition of what “literature” is—fiction or nonfiction, poetry or bilingual essays, postmodern novels alongside newspaper columns. In order to understand it, though, you have to know all the literary traditions in the rest of the world, to show how the Southwestern writers have twisted genres to fit their own needs. Accordingly, Don was the best-read man I ever knew. A couple of decades ago he put out an anthology of Texas writing, and he called me up to ask if he could use a chapter from one of my books—a chapter I don’t really like in a book that nobody read. I asked him, first of all, how he found it—surely he had more important stuff to spend his time on—and, secondly, why that of all things. He gave me some enthusiastic praise and I said, “Yeah, okay, I trust that you have a good reason,” but I think mainly he just wanted to find the piece you would least expect to see reprinted. He wanted every book to be a journey into the twisted counterintuitive eccentricities of the state.

But the main things I remember about Don are his unfailing good humor, his intense curiosity, his delight in being on the unpopular side of an issue, and that rarest of academic traits, a plain-sense no-bullshit writing style. I hope they lay him to rest next to some pathetically untalented Confederate general—he would appreciate the irony and laugh about it—or, better yet, next to that baseball player in the Hall of Fame. There have been a lot of great baseball players from Texas—Rogers Hornsby, Nolan Ryan, Tris Speaker—but the one they honored with a burial plot is Willie Wells, “The Devil,” who played in the Negro Leagues. Don, who wrote a biography of the most decorated soldier in World War II, a Texan named Audie Murphy who became an actor in Westerns, would appreciate the “hidden gem” factoid. The main thing we lost when we lost Don was all that deep reading that resided in his memory. He spent his life making other people famous and bringing forgotten artists and forgotten works back from the mausoleums of literary history. He not only told us who Frank Dobie was, he told us what he stood for. It’s gonna be hard to find the good stuff without Don around to tell us where it is.