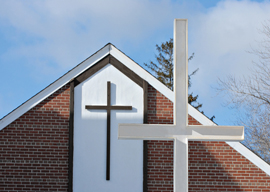 The religious world is buzzing this week with the unusual results of the Episcopal Church’s latest General Convention. That venerable institution has voted, among other things, to sanctify same-sex marriages, forbid discrimination in parish employment against transgendered clergy and other staff, apologize to the American Indians for introducing them to Christianity, and permit liturgical funerals for pets. To conventional Christians, these measures appear to indicate that the Episcopal Church has gone mad.

When I was young, the Episcopal Church was more than a pillar of the establishment; in many ways it was the establishment. Dubbed the “Church of Beauty” by some and “God’s Frozen People” by others, their worship”even of the “low church” variety”was impressive, with candles and crosses, well-trained choirs singing the musical wealth of the 1940 Hymnal, and the sonorous tones of the Book of Common Prayer and the King James Bible rolling off the celebrant’s tongue. Anglo-Catholic worship flew into the liturgical upper stratosphere.

“From the time of Elizabeth I, Anglicanism’s role has been to bless and approve whatever the Anglosphere’s dominant classes have wanted blessed or approved.”

The temples that housed these services were often works of art in themselves, designed by architectural masters of the caliber of Cram and Richardson“and filled with stained glass by the likes of LaFarge and Tiffany. Under Episcopalian aegis were built such patriotic temples as the National Cathedral, the St. John’s Church in DC, the Washington Memorial Chapel in Valley Forge, Patrick Henry’s church, and”for members of the Confederate schism from the national faith”St. Paul’s in Richmond.

But such purely religious efforts were far from the only influence Episcopalianism had on the life of the community, state, and nation. In the military, liturgical Protestant services were based on the Book of Common Prayer. In civil life, quasi-community functions that appealed to the local upper crust such as the Blessing of the Hounds were often performed by Episcopal priests. The web of elite boarding schools boasted a top rung whose members were popularly referred to as “Saint Grottlesex.” This referred to Episcopalian St. Paul’s and Groton schools, as well as the “non-sectarian” but chapel-endowed Middlesex.

This filtered down to everyday life. The sections on religion in Emily Post and Amy Vanderbilt’s etiquette manuals reflected an Episcopalian sensibility, and Church members were popularly supposed to mix the best cocktails and play the best golf. Social climbers new to a community were well advised to put membership in the local Episcopal parish on their “things to join” list, alongside the historical society, junior league, and country club.