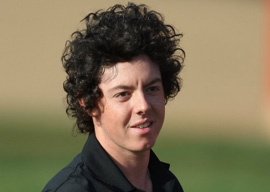 The glow is gone. The media has ceased to natter over your personal affairs. Your game is still good, but not great like it once was. End your Sisyphean struggle to win back fans. They’re gone. Now you’re free to be the aloof, robotic stiff you are known to be in the players’ locker room: unapproachable, uncomfortable in your own skin, snippy, bitchy, and humorless.

But what’s worse”and weirdly telling on so many levels”is that you have been the type that practically strives out loud. And that’s rather crude and low-rent. Yet there you were from a tender young age, swinging for greatness while losing bits of your soul along the way. All this time you were like Bill Clinton, but without the sleazy charm.

Tiger’s former swing coach Hank Haney keeps the shots coming with his new book The Big Miss, painting Woods as a porn-addicted creep who coldly ignored little kids as they begged for his autograph. Nobody wants his autograph now. Or if they do, it’s not for the same reason as before.

“While Tiger was steely and rigid, Rory has a plucky charm. He’s affably awkward and goofy with a stoner kid curly mop begging to be mussed and a slightly upturned nose.”

Look at it this way, Tiger: You”re a talented, history-making golf vet, yet one with a zipper problem. It’s not bad. You should be happy. With Rory McIlroy dusting off your throne, you can now enjoy your empire of dirt, liberated to a libidinous life of queasy conquests. This means you can hover about greasy-spoon chains scribbling down the numbers of tanned, bleached-blonde bimbos in every Waffle House and IHOP from Fruit Cove to Fort Myers. And, brother, that’s ripe territory. John Daly has nothing on you.

While Tiger was steely and rigid, Rory has a plucky charm. He’s affably awkward and goofy with a stoner kid curly mop begging to be mussed and a slightly upturned nose. That hair, though. Right?

You could argue that most rivalries are media bullshit, but it has to exist on some level between those two. Tiger is hyper-competitive. Woods is a fallen star. It’s an episode of “Behind the Music” set to golf.