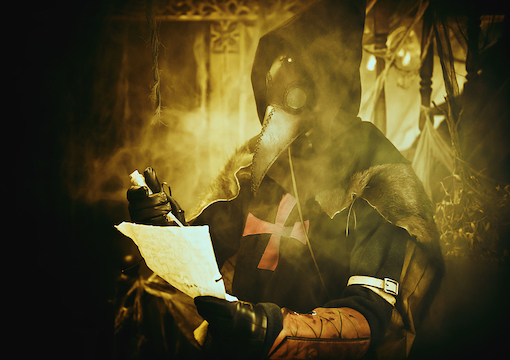 An old friend of mine who once ran a small publishing house told me that a swastika on the cover of a book increased its sales by 30 percent, irrespective of the book’s subject matter. Thus, if Tax Law for Philatelists would otherwise have sold ten copies, it would sell thirteen with a swastika on its cover.

These days, another symbol probably has the same effect on sales of books, namely that of the coronavirus, as easily recognizable as the Coca-Cola logo. I am as susceptible as anyone to this kind of salesmanship, at least where books are concerned, which is why I recently bought in France a short work, a novella in the form of a film scenario, by the well-known Russian writer Lyudmila Ulitskaya, with the wonderful title It Was Only the Plague. But really it was the fourteen scarlet Covid-19 virus particles on the cover that attracted my attention.

Would blue virus particles have arrested my attention to such an extent? I doubt it. Green wouldn’t have worked either. Blue and green would have brought to mind the sky or the fields, with positive connotations of freedom and delight. But scarlet signifies wickedness, devilishness, perhaps the evils of communism, or even, for evangelical Protestants, the Machiavellianism of cardinals. Yellow might have worked but would have conjured up hepatitis, which Covid-19 does not cause, or maybe sneaking cowardice, which is not right for the frontal attack of the disease.

“The author draws a comparison between the suffering caused by a disease and that caused by human malignity. The latter is probably the greater and the more difficult to bear.”

Ulitskaya wrote the scenario in 1988, she says, as a graduating exercise for a film scenario course that she was taking at the time. It was not published until 2020, when it seemed to have taken on an unexpected pertinence.

It is based on a true story, that of an outbreak of plague in Moscow in 1939. A microbiologist called Ahram Berlin was trying to develop a vaccine against plague in Saratov, 500 miles from Moscow, by experimenting with the live bacterium and animals. He was called urgently to Moscow for a meeting and he brought the plague with him. He put up at the National Hotel, where he began to suffer from the symptoms of pneumonic plague, which at the time had a death rate of a hundred percent. The doctor who recognized the disease, called Simon Gorelik, caught it too and died, but not before having alerted the authorities. Everyone who had been in contact with Berlin or Gorelik was immediately isolated, and a real epidemic was averted.

The contact tracing was done by the secret police, the NKVD, which of course was supremely experienced in this kind of operation, albeit in a nonmedical context. In her afterword to her book, Ulitskaya says that this was the only occasion in which the Soviet secret police in any of its incarnations acted in the interests of the Soviet people.

Ulitskaya keeps close to the true story, though she changes the names of the known characters and invents others. In 1939, I need hardly add, a visit from the NKVD was much to be feared. If they took you away, you were most unlikely to come back; they did not generally call on you for the sake of the public health. In one of the scenes, which perhaps tells you all you need to know about the NKVD, a colonel of that organization is visited with a view to being taken into isolation, but because he cannot imagine any action by the NKVD other than murderous oppression, he shoots himself rather than be subjected to the suffering that he has inflicted on others. The wife of another man taken into isolation goes to the NKVD to inform on her own husband in the hope that she will escape investigation—which, like pneumonic plague, she believes to be a hundred percent fatal.

The author draws a comparison between the suffering caused by a disease and that caused by human malignity. The latter is probably the greater and the more difficult to bear.

Epidemics have long excited the imagination of authors: When millions of us were placed under virtual house arrest, we were advised to read Boccaccio, Defoe, Manzoni, Giono, and Camus, among others. After all, we had time to pass. Ulitskaya could not have known how pertinent her scenario would become, but that is the way with literature—it often reveals a new meaning long after it was written. Even the fact that the Moscow outbreak of plague emanated from a laboratory has a certain resonance.

As it happens, Ulitakaya trained as a bacteriologist and laboratory worker. She writes in her afterword:

I want to underline the idea that the plague is not the worst scourge of humanity, for epidemics are natural processes which affect not only humans but animals. On the other hand, the epidemics of terror that we see from time to time in human communities—they are the work of man, and nature plays no part in these calamities.

The difference between the human and the natural in the production of epidemics is not quite as sharp as this passage suggests; war, for example, is a powerful stimulant to epidemics. But one knows what the author means.

Many of us must have wondered whether the virus or the human response to it has done more harm (I leave aside the question of its origins). I think people probably have stronger opinions on this subject than perhaps are justified by the well-foundedness of their opinions. For every piece of evidence there seems to be a counter-piece of evidence. As so often, the best lack all conviction (even when, for political or practical reasons, they have to pretend to have it), while the worst are full of passionate intensity.

Interestingly, Sikorski, the medical director of a hospital in Ulitskaya’s book, says to one of his doctors, “I name you my assistant in charge of quarantine. You will consider that we are in a state of war.” This, of course, is precisely what President Macron of France said. But is it not a strange kind of war in which one side fighting it is prepared to accept no additional deaths in the struggle? And yet who would dare to say that we should accept avoidable deaths for the sake of some other goal? I should certainly not like to do so.