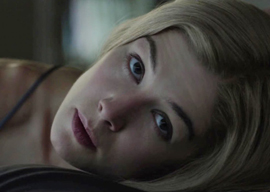 The denunciations of the hit mystery movie Gone Girl by feminists for daring to feature (spoiler alert) a scheming villainess rather than a brutish villain exemplifies the growing chasm in outlook between creative artists and the chattering class that assumes they are culturally superior because the entertainers they admire share their politics and attitudes.

Gone Girl is a pretty good movie based on a lively bestselling crime novel by authoress Gillian Flynn, but that hasn”t saved it from headlines such as The Guardian‘s “Gone Girl’s recycling of rape myths is a disgusting distortion.” The reaction has been enough to drive even Maureen Dowd to sound like a Taki’s columnist on the humorlessness of today’s social justice thought police. Obama’s decision in early 2012 to run for reelection by mobilizing a diverse coalition of low information voters united by little except their anti-straight white male-ist resentments continues to resound through the culture.

The vilification of Ms. Flynn for writing a work of fiction that betrays Team Women churned out by young journalists of few ideas and less experience reminds me of what sportswriting would be like if nobody kept score during games. Every day you”d discuss how everybody knows your team really won last weekend’s big game and anybody who says the other team was better is an anti-teamist, and you really, really take their hate-filled hatefulness personally.

Fortunately, in sports we keep score, so we have some objective means of determining what actually happened. And then we can move on. In culture, not so much.

“In all the excitement, however, everybody forgot that he had first murdered his 12-year-old stepdaughter in cold blood to keep her from alerting her mother.”

Some of the feminist rage at Flynn is due to her being a nice-looking, happily-married, heterosexual mother of two whose imagination is clearly far more in touch with the concerns of most women than are those of the self-proclaimed leaders of women.

Flynn, a canny businesswoman, recognizes that down through history, both sexes have on the whole preferred stories in which their own sex furnishes the antagonist. For example, fairy tales featuring evil stepmothers and wicked witches, such as the folk stories that eventually became Snow White, Cinderella, and Sleeping Beauty, were largely passed on by women, perhaps being told to other women while they were all spinning or sewing. Women compete with other women for men, so they enjoy stories about why other women deserve to be outcompeted.

Conversely, more than a few women have the tendency to fall hard for a bad guy. Comedienne Tracey Ullman, for instance, has gotten a lot of mileage over the years out of women who fall in love with men on Death Row.

Recently our society has decided that it’s a good idea to hire women as guards in men’s prisons. Not surprisingly, jailbird Tavon White, boss of the Black Guerrilla Family prison gang in Baltimore, impregnated four of his guardettes.

Those are extreme examples, but the breadth of female affection for scary men was most publicly tested in O.J. Simpson’s trial for murdering his ex-wife. Prosecutor Marcia Clark bet on the feminist theory of female solidarity, assuming that women jurors would want to avenge poor Nicole. Meanwhile, street-smart defense attorney Johnnie Cochran knew that race trumped sex in terms of loyalty. So they both agreed to pick black women, who ended up comprising seven of the 12 jurors. And we all know what happened.

And white jurors will do the same thing, too. Decades ago I was briefly a research assistant for the top criminal defense attorney in Texas, Racehorse Haynes. Two of his most spectacular cases defending accused husbands were made into television miniseries: Blood and Money with Farrah Fawcett and Texas Justice with Heather Locklear.

In the latter case, there was extremely strong evidence that oilman T. Cullen Davis, often said to be the richest man ever tried for murder in the United States, had broken into his former hilltop mansion and shot his estranged wife and her boyfriend. The trial, however, increasingly became about the wife’s behavior, with the prosecutors attempting to match wits with Racehorse by defending Mrs. Davis’s honor. The jury decided that Mrs. Davis had it coming and acquitted Mr. Davis. In all the excitement, however, everybody forgot that he had first murdered his 12-year-old stepdaughter in cold blood to keep her from alerting her mother.

(Soon after, the FBI arrested Davis for handing a hit man $25,000 to kill the judge in his divorce case. Despite audio and videotape, Racehorse got him off again. The 1970s were an amazing time in Texas and we shall not see their like again.)

In contrast, males don”t pay much attention to villainesses, since they are more inclined to feel competitive toward other males. In Disney animated features for boys, for instance, the bad guy is typically an effete older man like Captain Hook in Peter Pan, Jafar in Aladdin, or Scar in The Lion King.