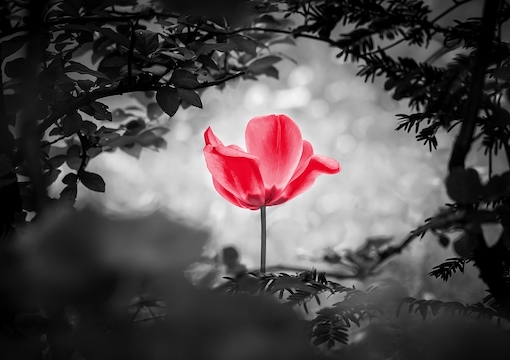 It is not often that the title of an article in the Guardian newspaper makes me laugh because of its absurdity, but I laughed when I read the following:

People struggle to understand grief, but it is a byproduct of love.

The article of which this was the title was an interview with a professor of psychology who was just publishing a book about grief and grieving.

In the article itself, the title was elaborated slightly. The professor told us:

I think a lot of people historically struggled to understand why there is grief, and in a funny sort of way, it is a byproduct of love.

I laughed at the very thought that people might not have made a connection between love and grief. I supposed that young people who fall in love do not think of the grief that will be consequent upon the loss of their love should it happen—there is such a thing as careless rapture—but can anyone of intelligence enough to read The Guardian reach the age of, say, 18, at the very, very latest, without realizing that grief is the consequence of the loss of somebody, or even something, loved? Does anyone need to be told by a professor of psychology that grief and love are connected in some way?

“Overall, it seems to me, the exaggerated claims of psychology as a discipline have reduced rather than increased human self-understanding.”

What, indeed, would grief without antecedent loving attachment be like? It may on rare occasions be grief that tells us on losing someone or something how much we actually loved that someone or something, having previously taken him, her, or it for granted. It is a commonplace that one often does not appreciate what one has until one loses it. We can therefore be surprised by grief. But still the connection between love and grief is clear, as the very notion of loveless grief is not even comprehensible, being almost a contradiction in terms.

When the professor tells us that “a lot people historically struggled to understand why there is grief,” she is saying something that strikes me as false, but not in an entirely innocent way such as a mistake that anyone could make. In fact, it is an implicit sales pitch for the study of psychology, an appeal that the funds should keep coming. Thanks to university departments of psychology, we are now enlightened about the deeper aspects of life such as grief in a way that our poor benighted ancestors were not; if we study psychology enough, all the mysteries of human existence will be cleared up and henceforth everyone will go through life like a hot knife through butter. No more sorrows, no more squabbles, no more evil or wickedness, no more unpleasant or disturbing emotions, etc., etc.

In what sense did “people historically struggle to understand why there was grief” before they were enlightened by psychologists? Did the 19th-century readers of Alfred Tennyson, for example, have difficulty in understanding what he meant in his great poem of grieving, “In Memoriam,” when he wrote:

I envy not the beast that takes
His licence in the field of time,
Unfettered by the sense of crime,
To whom a conscience never wakes.

Nor, what may count itself as blest,
The heart that never plighted troth
But stagnates in the weeds of sloth,
Nor any want-begotten rest.

Grief is the price of love, but it is love that makes the world go round, or at least one of the most important things that make life worth living. Love and the moral sense complicate life greatly, and make it difficult for most of us, for without them there would be no grief or any apprehension of evil; but without them we should be little different, conceptually, from an amoeba under a microscope.

There is an immense poetry of grief in the English language, and almost certainly in all other languages. I will quote only one more example, from hundreds of thousands possible (I have an anthology published in 1911 of poems in English about the death of children, in 1911 the infant mortality rate having been about twenty to thirty times what it is now). It is from Robert Bridges, a pediatrician before he became a full-time poet and man of letters. He writes of a dead child whom he has attempted to treat:

So quiet! doth the change content thee?—Death, whither hath he taken thee?
To a world, do I think, that rights the disaster of this?
The vision of which I miss,
Who weep for the body, and wish but to warm thee and awaken thee?

Ah! little at best can all our hopes avail us
To lift this sorrow, or cheer us, when in the dark,
Unwilling, alone we embark,
And the things we have seen and have known and have heard of, fail us.

Does Robert Bridges or any of his readers (who, it must be admitted, are now vanishingly few) struggle to understand why there is grief, such that if we subjected them to a battery of questionnaires and put them through a range of immensely sophisticated and expensive scanners, either we or they would say at last, “Aha! Now I understand why there is grief! I never did before.”

I do not doubt that psychology can illuminate small corners of human existence, and investigate for example how, physiologically, we perceive the world; but overall, it seems to me, the exaggerated claims of psychology as a discipline (it is, alas, one of the most popular subjects in universities) have reduced rather than increased human self-understanding, and placed distorting lenses between people’s experiences of life and genuine reflection about themselves and human life in general. That is why a professor of psychology can say, in all apparent seriousness, and as if revealing something unknown, that “in a funny kind of way” grief is a by-product of life. Only people who have been assiduously miseducated could find anything illuminating in this.