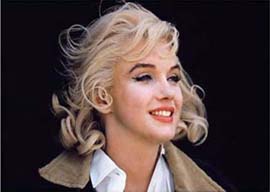 Growing older is an odd experience made stranger by knowing things which should be familiar to everyone but that hardly anyone knows.

This is brought to mind when the topic of Marilyn Monroe comes to the fore. It would have been her 85th birthday last week, and in all the time since her death she has never quite been out of the limelight.

Most recently her aura was summoned from the crypt yet again when singer Mariah Carey named her child “Monroe” in her honor. It is a dubious mantle.

Sometime between 1962 and today a mythology has developed that depicts Marilyn Monroe as an innocent abroad, a misunderstood soul abused by the studio system who all her life sought genuine affection from dastardly males who only sought her body. This nonsense probably reached its popular apex with the insipid Elton John song.

The real life of Norma Jeane Baker/Norma Dougherty/Marilyn Monroe could not be further from the “noble prostitute” mythos.

Yes, Monroe had a tragic childhood wherein she spent her very early years having been abandoned by her father and living with a mentally unstable mother. During her childhood and teen years Monroe was delivered from this situation to live in a series of foster homes and afterward with family friends to whom she sometimes referred as “aunts.”

When she was finishing high school, World War II broke out and Norma Jeane met and married soon-to-be Merchant Marine James Dougherty before he shipped out to sea.

During the time he was off defending his country, his wife began legitimate modeling, but this soon progressed to trading her body for work and doing nude photo spreads. No one made her do it; she did it of her own accord. Mrs. Dougherty didn’t bother to mention most of these escapades in any letters to her husband, who was risking his life in the Pacific.

“Marilyn found true love—and she wholeheartedly rejected it in favor of sex and influence.”

By the time of his return, his wife had tested for some bit film roles, but a married bombshell wasn’t worth nearly as much as an unmarried one at the box office. How Norma Jeane got these auditions is hardly a mystery, the casting couch being very much a part of the scenery out West.

The studio wanted her to divorce the war hero, and Norma Jeane obliged. She told James that it was all mere formality and they could still live together and do all the other things of private married life, but to his credit James told her that while he loved her, he wouldn’t engage in such licentiousness. Norma Jeane dumped him flat for fame.

During those early days she slept with just about everyone to get a film role, though also with other young talented actors. One of these was the now-deceased Tony Curtis before he became a star. According to him, following another assignation later in their careers she had his “miscarriage.”