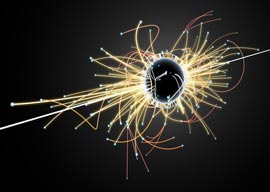 There are good scientists and there are mad scientists. The good ones have invented the safety pin, central heating, and Italian coffee machines. The mad ones have invented smog, Roundup, and the military-industrial complex. The good ones tread with great care where God’s magnificent creation is concerned; the mad ones would cut down the Tree of Life to find out how many rings it has. The mad ones are also those who, at the cost of billions of taxpayers” dollars, have invented a gigantic machine of unbelievable complexity and superhuman sophistication that produces nothing at all”not even a fart.

It is named the Large Hadron Collider.

Now, this is the largest machine ever built in the entire history of mankind. A sort of circular tunnel 17 miles long and buried deep into a bucolic stretch of land at the border between Switzerland and France, it has been filled to the brim with the most elaborate technical gear possible while about 1,000 scientists are busy every day to keep the monster in motion.

Its aim, we hear, is “to allow physicists to test the predictions of different theories of particle physics, high-energy physics and in particular, to prove or disprove the existence of the theorized Higgs boson and the large family of new particles predicted by super-symmetric theories, and other unsolved questions of physics, advancing human understanding of physical laws.”

Amazing, you may say, particularly if Mr. Higgs the boson one day steps out of the microcosmic undergrowth and declares himself. On the other hand, and as for now, not much has come to pass. Unsolved questions of physics persist in being just that, and the great world formula that might be the key to all existence remains as elusive as an atypical quark on an uncharted mission.

“It is here that we suddenly realize with a shudder that the LHC has a far more sinister side to it than generally imagined.”

That is perhaps the reason why we are treated in regular intervals to news stating that something important is brewing in the LHC that will soon be made known to an astonished world. Unfortunately, and as already said, these announcements have so far not been followed up by really tangible results. Which is perhaps the reason why now and then some interesting propositions are brought forward, for example that Einstein’s inane relativity theory could be proved somewhere deep in the belly of the LHC. Which sounds perfectly possible to someone like myself, who would think that all it needs is an electron hurled so fast around the tunnel that it finds itself waiting for itself when arriving at the point of its departure.

In the same vein run statements suggesting that the big bang theory could be proved by sort of developing a mini-version of the former. Or that the capacity exists to create miniature black holes by compressing matter so densely that, even if infinitely small, it is in essence of the same genus as the giant cosmic monsters that are capable of swallowing entire galaxies.

It is here that we suddenly realize with a shudder that the LHC has a far more sinister side to it than generally imagined. Because what transpires is that the mad wizard-apprentices who run it have broken into God’s innermost sanctuary and are using utensils and possessions without having the faintest idea of what they might unleash.

Mini black holes? Imagine that one would be created there, perhaps by a scientist too long on Prozac or coke who finally went totally insane. Couldn”t it be perfectly possible that this is the natural way of a black hole anyway to start its career, namely infinitely small while beginning to devour everything around it? Which, needless to say, means that our beautiful old planet would be merely a peanut on its menu.

Small wonder, thus, that there are always more weighty voices who openly warn that the LHC is not beneficial for mankind at all, but is in fact a veritable doomsday machine that could wipe us all out in an instant. This becomes even more pronounced if one of the voices belongs to a highly respected physicist like Stephen Hawking, who even suggested that the damn thing might open the door to another dimension.

Meanwhile, the giant apparatus continues to slurp money like a blue whale slurps plankton. This was fine while the dough lay thick on the ground, but now, with the euro all in tatters and economies shrinking fast, the national exchequers are getting more reluctant to cough up the usual subsidies. Taking this and the always more apparent incertitude and suspicions surrounding the apparatus, every sane person would probably agree that the LHC should be closed down without any delay. But this will of course unleash the vehement resistance of everyone involved, particularly the powerful high-tech industry, which has made enormous profits out of this gigantic folly.

So what to do? The Swiss have a marvelous democratic invention called Volksabstimmung, or plebiscite, and it only needs a well-organized one to stop the Large Hadron Collider forever from creating any serious mischief.