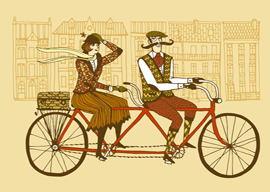 A couple of columns ago I wrote about an incident that took place at the Eagle Club here in Gstaad. I indicated that if cowardice prevailed, I would go into details. I had two weeks to think about these details. Well, the trouble is that cowardice did prevail, and although the Eagle has not lived up to the requirements of a club, what happens in a club stays in a club, and I need to live up to the standards of someone who joined it sixty years ago and generously contributed to it financially when it was floundering and about to go under.

As I wrote two weeks ago, the mix of gentlemen and lowlifes is a toxic one; the latter is bound to step out of line and revert to type. Like throwing a punch from behind after misinterpreting a joke, or lying about what took place beforehand. Fraudsters should not be invited as guests in clubs, not because they might set up a crooked deal—which they would if they could—but because manners go step-by-step with morals, and a fraudster lacks both. A toxic mix indeed. Finally, when my wife, born a serene highness in a 900-year-old noble family, and one who has never in her life had a snobby thought toward a fellow human being, feels insulted enough to commiserate with a woman by telling her she’s sorry the woman had to marry a man so common—no use going into details about that particular incident—it’s time to call it a day. I’m off for good. The irony is that I no longer like the place. A club cannot be run by a Mrs. Danvers who, although an employee, chooses who comes in or not. She, of course, will bring in lowlifes. Having said all that, I wish the place well. My children are members and my grandchildren use it, but the next time I cross its portals I will be a transgender black woman wearing fishnet tights.

“The next time I cross the Eagle Club’s portals I will be a transgender black woman wearing fishnet tights.”

Mind you, the days when men walked on the outside of the pavement and stood up when a lady entered the room have gone the way of high-button shoes. I am told that giving up one’s seat to a woman in a public transport in America can land one in poo-poo. Feminists do not take kindly to what they feel is condescension. Edmund Burke thought that manners were more important than laws. Poor old Edmund, he wouldn’t exactly have been sought after by television producers seeking to push the boundaries nowadays. Common courtesy, in fact, might soon become a statutory offense.

Good manners are not a superficial activity. They serve a moral purpose. They illustrate that one is willing to put others first. A Schubert song, a Hopper painting, a Chopin nocturne, a Mozart aria—all are a blow against rudeness and the brutality of modern life. The great Paul Johnson wrote that even a duel, with its mannered code, was better than the murderous brawls in the streets, the punch from behind.

The media is at present obsessed with the Weinsteins of this world. But Hollywood etiquette has always been about reminding others that you are more important than they are. The level of hostility and the decline in civility in Hollywood pave the way for society; alas, young people remain glued to screens that depict vulgarity and violence. The raging cult of celebrity—the “I am somebody important, you are a nobody” syndrome—has spread throughout the world, where once upon a time celebrities were not only gracious and polite in public, they aped society swells whom they considered their betters.

Displays of selfishly hostile behavior may be common in Hollywood and downtown New York and even in London, but it’s not always the “stars” who are responsible. The diva-like behavior filters down, and it’s the personal assistants who are as obsequious to their bosses as they are aggressively disdainful toward others. What is worse, however, is the modern cultural phenomenon of needing to shock, letting our emotions hang out and all that. The utter drivel I read every day coming from so-called celebrities shows that the two words missing most from today’s lexicon are self and respect. Revealing things that one would really hesitate to tell one’s shrink—I haven’t got one, but some of my best friends do—is now commonplace, replacing the elegance of silence that once upon a time was worth a thousand words. Actually, spilling the beans means only that the spiller feels inadequate and needs to join the rest of the wannabes. Whatever happened to reticence?

Yes, society is corroded by lowlifes, but it was always thus. Remember when men took off their hats when a lady walked into a lift or when they went into a restaurant or bar? Try to tell a man nowadays to take off his hat, and get your dukes up. Offensive informality was always more American than British, and I for one never minded that. The rural South always had better manners than the North, and where I went to school, manners were more important than anything except honesty. One never lied or cheated. And how brilliant was the great Hank Williams Jr., who sang: “We say grace, and we say ma’am, and if you ain’t into that, we don’t give a damn.”

I’m off to the Bagel, a week late already.