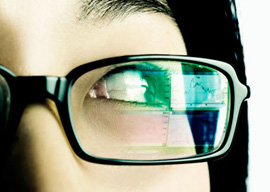 As if smart phones weren’t irritating enough, by the end of the year people will be wearing them on their faces. Google Glasses will finally allow trendy transhumanists to see the world through Terminator-style digital eyes. According to the boosters, these high-tech sunglasses will come equipped with a camera, a GPS locator, motion sensors, audio input/output, and a non-transparent heads-up display that projects Cyberia onto the surrounding environment.

They will feature navigation programs for people who can’t follow simple directions, superimposed historical facts for those averse to reading old-fashioned books, and immersive virtual-reality games to alleviate suburban sprawl’s soul-crushing monotony. Whether you’re searching for an old friend in the area or just a decent falafel, Google Glasses will guide you through modern life’s chaotic landscape. You’ll never have to ask another living soul for information.

If you are inclined to meet people in real life (or IRL, as it is now called), facial recognition will eventually provide instant dossiers on the folks you pass on the street. Unpredictable interactions may be eliminated entirely. If difference of opinion gets on your nerves, you can download an app to locate people in close proximity who share your interests, hobbies, and social-network friends, then coagulate inside your cozy little world. You can even stalk that special someone from behind your digital shades.

“I liked computers better when I had to go out of my way to use them.”

I imagine that some version of Microsoft’s much maligned “Avoid Ghetto” app will be available for anyone who can’t recognize obvious red flags such as dilapidated buildings, sagging pants, or streets named after a nonviolent activist. And maybe there will be an “Imminent Flash Mob” app to warn you about marauding youths coming your way“or to keep you updated in case you want to join in the fun and smack down a random polar bear. Now that you live in augmented reality, the only limits are the programmer’s imagination.

I’m straining to see the upside, but at least these first-generation cyborgs can look me in the eyes while they incessantly check their Facebook pages.

The droids at Google stated in a recent blog post:

Every day we aim to make technology so simple and intuitive that you stop thinking about it”we want Google to work so well, it just blends into your life.

Well, I liked computers better when I had to go out of my way to use them. Back in the good ol’ days, I’d walk to the library or a friend’s house to “surf the Net” for a couple of hours. Having grown up in the sticks, I marveled at this rapidly expanding universe of underground music, esoteric philosophies, vivid conspiracy theories, and deviant porn”novelties for which you would otherwise have to travel. These things are so mundane today, they’re hardly worth mentioning.

By the time I sprouted my first chest hair, everybody had the Internet at home. Within a few years, there was a laptop in every tote bag. Then came the endless flood of smart phones. My generation is the last that will remember a world without ubiquitous computers. Before social networks killed the mystery of personal interaction. Before the growing e-book market turned my favorite medium into a quaint novelty. I’m just old enough to miss it.