GOP War of All Against All? 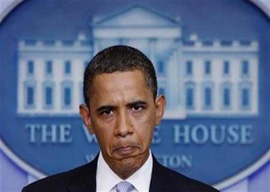 There still exists a possibility that, come Jan. 20, 2013, we could have a Republican Senate and House, and a Republican president.

But there is also a possibility that a Goldwater-Rockefeller-type family bloodletting could sunder the party and kick it all away.

America is bored with Barack Obama. The young and the minorities are still with him but exhibit none of the excitement or enthusiasm of 2008.

Moreover, we have been through three years of 23-25 million unemployed or underemployed. Our national debt is now larger than the national economy, approaching Italian proportions. The class warfare rhetoric is beginning to grate. A huge majority believes the nation is on the wrong course.

Who wants four more years of this?

Democratic hopes for 2012 hence hinge on that party’s ability to portray the Republican alternative as unacceptable if not intolerable. And the Republicans have begun to play into that script.

The GOP field of candidates suddenly seems headed to a finale that will call to mind the last scene of Hamlet, the dead and dying everywhere, but no Fortinbras to restore order in the house.

“The Republican candidates have gone beyond challenging each other’s records and positions to impugning their character.”

In the Sunday debate, Jon Huntsman accused Mitt Romney of virtually questioning his patriotism, when Mitt asked how he could serve as Obama’s man in Beijing and be a credible opponent of Obama.

“This nation is divided … because of attitudes like that,” said Huntsman.

Newt Gingrich, who promised in Iowa not to go negative, now calls Mitt a liar. A super-PAC supporting Newt is about to paint Mitt as a Bain Capital corporate predator, a Gordon Gecko whose modus operandi was to swoop down on troubled companies, loot them, fire workers, leave a skeleton crew and move on.

A month ago, he was surging. He had opened up a lead in national polls, moved ahead in Iowa, South Carolina and Florida, and, with the backing of the Manchester Union-Leader, was closing in on Mitt in New Hampshire.

From his crisp debate performances, Newt had steadily risen from his disastrous debut, while one after another of his rivals—Michele Bachmann, Rick Perry, Herman Cain—had taken the lead and lost it.

Newt had engineered a spectacular comeback, seemingly peaking at exactly the right moment, only weeks before the Iowa caucuses.