Gore Vidal: Pleased to Leave You 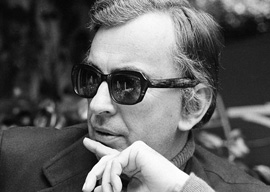 Gore Vidal was as good as it gets where writing is concerned. I can”t think of a single awkward sentence he ever wrote, and he wrote a hell of a lot for someone from a very privileged background who could do more enjoyable things than sit behind a typewriter. He wrote twenty-six novels, among which were Williwaw, The City and the Pillar, Washington, D.C., Myra Breckinridge, 1876, and his zinger, Julian, a novel about homosexuality that had his chic friends and his patrician family heading for the hills. That was in 1964. Vidal’s essays were his forte and his most successful play was The Best Man, which had a recent revival on Broadway.

But you know all this. I want to tell you about a Gore Vidal few people knew, because he was an expert in hiding his feelings behind a cold and cynical mask. The first time I met him in London more than forty years ago, his opening line was, “Oh hello, I read with great interest the lies you wrote about me.” He then shook my hand and smiled.

“If only I could say the same,” I answered, as no one had ever heard of me at that point except for my parents and a few close friends. It was the beginning of a beautiful friendship, however seldom our paths crossed. Gore wrote me short notes, mostly urging me to keep on writing and always saying bravo when some rude remark about Israel’s treatment of the Palestinians had readers asking for me to be sacked.

Like all extremely intelligent people, he had an eccentric side to him, and he was convinced that I was a well-known English writer churning out fluff under the pseudonym Taki. Go figure. Vidal was very funny about queens, as he called people of his sexual persuasion, but in his case he was totally monogamous.

He was also extremely brave physically and although a gentleman of the old school, he never backed off when challenged. And he got challenged a lot because he was merciless with frauds, dumb rich people, social climbers, right-wingers, drag queens, ugly feminists, and cheap celebrities such as Bianca Jagger and her ilk.

Gore was the first to stand up to the thuggish and bullying Bobby Kennedy, who as Attorney General was busting down doors and acting like the gangster his father and most of his family were and are. Bobby threatened Vidal in the White House during a state dinner once, and Gore told him to go ahead: “I know how to handle cowardly gangsters like you.” Kennedy dropped it. Gore’s half-sister was Jackie’s stepsister, and he saw through Jackie long before we had elevated her to sainthood.

His wicked wit was devastating. When informed that Truman Capote had just died, he deadpanned that it was “a good career move.” Capote was jealous of Vidal’s patrician manners and superior talents and spread a lot of malicious lies about him. Vidal never bothered to complain or ask for a truce. He simply killed Truman a second time.

When a very drunk Norman Mailer landed a left hook on Gore’s jaw at a very grand DC party 35 years ago, Vidal smiled and announced that “Words fail Norman Mailer yet again.”

Back in 2002 I went up to Provincetown to spend a day with Norman Mailer for a cover story we did in The American Conservative. To my surprise I found Gore Vidal sitting on the veranda with a wicked smile on his face. “Have you boys discovered a new fascist to lead you?” he asked, pointing at Norman.

“He’s been here a whole week and he’s driven me nuts,” said Mailer, who matched wits with Gore throughout his life. I was pleased to see two old literary lions in winter poking fun at each other.

I am very sad Vidal is gone, but he must have been pleased to leave. The modern world was not his natural habitat.