Grab Your Ankles and Let Them In 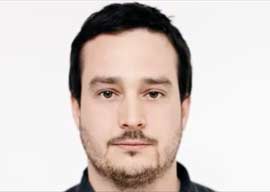 Ladies, gents, and everyone who can’t decide what the hell they are, I believe we’ve found the Ethnomasochist of the Decade.

Karsten Nordal Hauken describes himself as a “socialist, feminist, and anti-racist.” That’s three strikes right there. He is a member of Norway’s Socialist Left Party. Although allegedly a Norwegian, many have suggested that his brown eyes disqualify him from any claims to a pure Nordic badass Berserker Viking heritage.

Hauken says that about five years ago, he was brutally raped by a Somali migrant he’d invited to his apartment, presumably to play checkers and talk about the weather. After being raped, he was rushed by an ambulance to an emergency center, where DNA evidence was plucked from his rectum.

About six months later, his assailant was arrested for carrying a knife, and police matched his DNA to that they’d scraped from Hauken’s booty-hole. The unnamed Somalian claimed that his sexual encounter with Hauken was consensual, but he was found guilty at trial and spent four and a half years in prison for the crime.

But Hauken says that after being informed that his former ass-invader will be deported to Somalia after being released from prison, he is undergoing a severe crisis of conscience that, but of course, he wishes to share with the world for their edification and”in my case, at least”amusement.

“He is a specimen of True Belief that is so extreme, you can’t even rape it out of him. Hauken walks the walk and talks the talk. Or, more properly, he limps the limp and lisps the lisp.”

I felt a relief and joy that he was going away forever. I felt that the Norwegian government took on the responsibility to exercise the ultimate revenge, like an angry father who confronts a child abuser….But I also got a strong sense of guilt and responsibility. I was the reason why he should not have to leave Norway, and heading for a very uncertain future in Somalia. He had already served his sentence in prison. Should he now be punished again? And this time much harder?…

I am afraid that no girls want me, and that other men laugh at me. Afraid that I’ll be perceived as anti feminist when I say that young men who are struggling should get more attention….

I am a heterosexual man, and I was raped by another, presumably heterosexual man…a Somalian asylum seeker. My life fell into ruin, but now I feel guilty about him being sent out of the country….

I stand rock solid in my opinion that people like him need our help. I want us to continue to help refugees with such a background…For I am a human being first, and not a Norwegian. No, I”m part of the world, and the world is unfortunately unfair.

There are so many fantastic one-liners there, but the funniest one by far is where this anti-racist socialist admits that even life in a Norwegian prison is better than living in Somalia. Well, that and the line where he explains that neither he nor his rapist is homosexual, because (I suppose) only heterosexual men have penetrative intercourse with one another. And, to be fair, I got quite a few yuks about him worrying whether reporting his rape would lose him some cred with his feminist allies who just so happen to be ladies.

But he is a specimen of True Belief that is so extreme, you can’t even rape it out of him. Hauken walks the walk and talks the talk. Or, more properly, he limps the limp and lisps the lisp.

Hauken’s story reminds me of Amanda Kijera, who managed to squeeze in an all-night raping early in 2010 and whose response to it makes her Hauken’s chief competitor for Ethnomasochist of the Decade. In Haiti shortly after the huge earthquake in Port-au-Prince, Kijera was raped for hours by a black man and found a way to blame white men for it:

…I was held on a rooftop in Haiti and raped repeatedly by one of the very men who I had spent the bulk of my life advocating for….It hurt. The experience was almost more than I could bear. I begged him to stop. Afraid he would kill me, I pleaded with him to honor my commitment to Haiti, to him as a brother in the mutual struggle for an end to our common oppression, but to no avail. He didn”t care that I was a Malcolm X scholar. He told me to shut up, and then slapped me in the face….Not once did I envision myself becoming a receptacle for a Black man’s rage at the white world, but that is what I became. While I take issue with my brother’s behavior, I”m grateful for the experience.

Just like Karsten Hauken, Ms. Kijera found a way to feel grateful for “becoming a receptacle for a black man’s rage.”

And then there’s the female “no borders” activist who was persuaded to keep her mouth shut after being gang-raped last year by Sudanese immigrants on the French-Italian border so as not to cast scorn and suspicion upon these humble freedom-seekers.