Grabbing Art by the Pussy 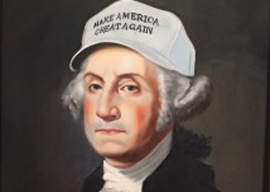 Last Saturday, at Gallery 151 in New York, photographer Lucian Wintrich put on a pro-Trump art show entitled “Daddy Will Save Us.” I was one of the featured artists and contributed three large-format prints. There was also pharmaceutical enfant terrible Martin Shkreli, the racially charged Marcus Epstein, convicted journalist James O”Keefe, and Twitter refugee Milo Yiannopoulos, who bathed in pig’s blood under photos of Americans killed by illegal aliens. Every contributor had been punished at one point in their life for violating PC taboos, and this culture of castigation was a big part of the show. It was just as much about the left’s shame tactics as it was about the right’s pride.

Wintrich was fired from his job at the ad agency Anomaly after Milo praised his “Twinks for Trump” photo series (photos of young gay models in Trump hats) in an article entitled “How Donald Trump Made It Cool To Be Gay Again.” The show itself was fired before it even began when social justice warriors launched a bitchy campaign to embarrass the venue. The story from the Pierogi Gallery, a.k.a. The Boiler, is they backed out because they were tricked and didn”t know it was a Trump show. When Lucian published the original contracts that included the words “Trump Gallery Show,” the story then became they thought Lucian was being sarcastic but canceled the show when they discovered that he “really believes in this stuff.” In other words, he was guilty of thoughtcrimes.

“The New York art scene is no braver than a bunch of castrated college kids getting told what Halloween costumes are culturally appropriate.”

This is the climate of fear we are dealing with in America and the New York art scene is no braver than a bunch of castrated college kids getting told what Halloween costumes are culturally appropriate. What I find most amazing about all this fascism is what complete, total, and utter losers the Thought Police are. This is not Tony Soprano saying, “If you can quote the rules, you can obey them.” It’s an eco-friendly witch who calls himself Damon Stang and a meditation expert who goes by Dharma Jay. It’s a performance Faerie named Bizzy Barefoot with a Facebook page called “Queer Love against Trump’s Hate!” It’s a schoolteacher who spent all day writing “Fuck Trump“ in his notepad. It’s also lumpy spinster Jamie Peck sending a mass email to everyone in pop culture media imploring them to ignore the story. We refused to give up and, with only a few days until the launch, managed to scrounge up a new location. We didn”t release the address until day of and the warriors slept in too late to stop it.

That’s all you have to do with these people, keep going. There were maybe two or three protesters who stood outside in the rain and inside the place was completely packed. There were mostly conservatives there but also a very eclectic group of people, from curious artists wondering what all the fuss was about to iconic NYC icons such as Sophia Lamar. The art was good, too. Epstein’s paintings of George Washington in a #MAGA hat looked like they belonged in the Met. O”Keefe displayed his Emotional First Aid Kit from the viral video, Art Wing Conspiracy had their “Think Different“ posters, the Godesky brothers brought the original art from their Trump cards, and Jon Pro showed off his Rise of the Republic painting, among others.

Some kid snuck in and started putting swastika stickers on the art, which I missed, but I did catch a big fat guy in a Che Guevara hat who was clutching a bag close to his side and acting very suspicious. I asked him if he was a plant and he immediately started panicking so I threw his hat in the pig’s blood, grabbed him by the collar, and threw him out the door. As I was marching him out, he broke into this high-pitched scream that sounded like an 8-year-old girl on a roller coaster. It was one of the funniest and most disturbing things I”ve ever heard. It was also invigorating and the atmosphere at this thing reminded me of early-Giuliani New York when there was a sense of danger and people wanted to get into trouble. Despite the art being so disproportionately faggy, there were tons of beautiful women floating around and they were flirtatious because everyone was drunk.