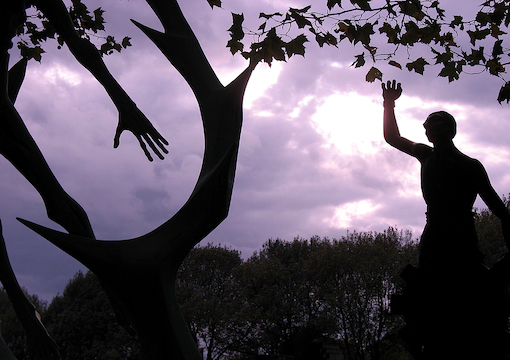 Of late, I have taken a walk almost every day in the cemetery of Père Lachaise, which is near my flat in Paris. It is said that 3 million people are interred in the cemetery, and so, in a sense, it fulfills the advertising slogan of the News of the World, the British Sunday tabloid that brought scandal and sensation to the lives of millions (as a child, I was not allowed to look at it) until it was closed down by its owner, Rupert Murdoch, after its journalists had been found hacking into the telephones of celebrities: its advertising slogan having been All human life is there.

It would be an odd advertising slogan for a cemetery, but as I have said, in a sense it would be true, for the cemetery is inexhaustibly interesting and varied. There are, of course, very famous people buried there: Balzac, Proust, Oscar Wilde, and many others. There are even more people known to history but of lesser fame than these: Alphonse Bertillon, for example, who developed a system of anthropological measurements that, being unique to every individual and once taken, allowed the police to identify people who had once been unknown to them; or Gustave Le Bon, the doctor and psychologist who first analyzed the peculiar effects on mentalities of membership of crowds, namely those of anonymity, contagion, and suggestibility, worth considering in the case of Facebook and Twitter; or again, Édouard Drumont, whose book La France Juive (Jewish France) was for long the bible of French antisemitism, and sold hundreds of thousands of copies from its publication in 1888 until the Second World War, and whose tomb, with a bust, says simply that he was an Homme de lettres (a man of letters).

“Surgeons, botanists, cranks: The tombs of people of all descriptions are to be found there.”

Then there are the painters, some of them famous, most completely forgotten; and when you see their works, you can understand why. After all, it is in the nature of most human artistic, and probably scientific, endeavor that it should fail, or that its success should be limited at best.

But what is success? Does the presidency of the French association of pork butchers count as success, for example? Among those whom I would certainly count as a success was Dupré Barbancourt (not a name, I think, on everyone’s lips), who emigrated from the Cognac region of France in 1862 to found a rum distillery in Haiti, which more than a century and a half later still produces the most excellent rum, in fact the best known to me. Barbancourt, who died in Paris in 1907, must have been an extraordinary man (among other things, he was consul general of Liberia in Haiti, thus representing one of the only two black republics of his day in the other). As far as I know, there is no biography of him, and perhaps there remain insufficient materials for one; but surely so unusual a trajectory in life as his should find some academic scribbler somewhere to attempt the work, especially when one considers the trivialities to which such scribblers are prepared to devote themselves.

Surgeons, botanists, cranks: The tombs of people of all descriptions are to be found there. There is a security guard “basely” killed by a bandit (surely, the quality of the killing is irrelevant?); and a bandit shot dead by the police in the course of a shoot-out. The grave of Marie Trintignant, the actress brutally killed by her rock-star boyfriend, Bertrand Cantat, is there; being a celebrity, he served only four years in prison for his terrible crime.

There are exiles of every type and nation, from mystics to terrorists. A favorite of mine is that of an exiled family from Iran, all members of the Tudeh, the Iranian communist party, one of whom is quoted on the memorial: “Communism is the hope of the world.” If that were so, one wonders what the despair of the world would be.

There is, in fact, a communist corner in the cemetery, where such luminaries of the French Communist Party as Maurice Thorez and Georges Marchais are buried, as well as communist or communist-sympathizing writers, not all of them by any means negligible. The fact that they are all buried together or in close proximity, these dogmatic materialists, so that they should be united in death, is powerfully suggestive of the quasi-religious appeal of communism. I am not religious myself but on the whole (and within limits) prefer the religious kind of religion to the secular kind.

But it is not only the tombs of the well-known, the outstanding or the unusual—in short, the kind of people who have an entry on Wikipedia—that stimulate interest or reflection, but many of the “ordinary” tombs, which suggest the normal potential tragedies of existence: parents who outlive their child or children by decades, for example. Grief at loss is often inscribed on the tombstones:

And now what am I going to do
With all this time?
What will be my life
Surrounded by all these people who do not interest me
Now that you have gone?…
Truly, I have nothing left to do.

Considering that grave robbery is possibly the oldest profession, older even than what we must now call sex work, it is a little foolish of me, perhaps, to be shocked by the fairly widespread looting of marble plaques and other accoutrements of the tombs, presumably for use as decorations in private homes. How are these thefts carried out? The cemetery is surrounded by a high wall with a limited number of entrances manned by staff. Could it be that they are accomplices in these thefts? It surely cannot be very easy to remove marble slabs without being noticed, but it is said that these thefts are increasing.

Why is this shocking, when the memorials are often of people completely forgotten and no individual person is directly harmed by such theft? This is a subject for reflection.

The delight of a near neighbor of mine, Madame J…….., who is 87 years old and bent over with age, is to feed the cats of Père Lachaise. I see her walking, very slowly and with the aid of a stick, preceded by a cemetery cat who stops from time to time to make sure that she is following, and will not continue until she catches up. I find this strangely reassuring, I can’t quite say why.