Greece Isn’t Back, but Taki Is 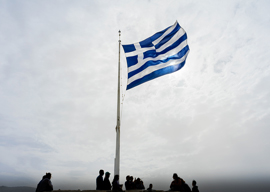 Some jerk know-nothing writes in an unreadable American newspaper that Greece is back—Athens, actually. He would; he’s an American who probably thinks that the lack of starving Greek beggars in the streets à la Calcutta back in the 1920s means we’re back. Have another hamburger, asshole, and stick to Trump-bashing. I knew Athens before it went down, and we’re not back, just us rich who are back for the summer.

Take my friend Irene Pappas, wife of a Golden Dawn member of Parliament, who edits a national newspaper, EMBROS. She has three children, all doing brilliantly in their schools, but lives on a salary of 1,050 euros a month. I wish that some of those people I sometimes hear complaining of their lot lived on such a sum. How does one do it, with three children who need to be clothed, fed, and provided with books and other school needs? I had a drink with Irene, who did not complain once, was positive about the future, and asked only for fair coverage—as there is none—by the powers that own the private channels of Greek television. They call it democracy, but Golden Dawn is not allowed to be mentioned on Greek television, yet it will be either the second- or third-biggest party in Parliament in next year’s elections.

I walked around the city looking for my old haunts that are all gone. There are still some streets in the old part where jasmine-creeper and orange-tree scents mix headily with those of car fumes and honeysuckle. But all the old tavernas and their owners (all good friends) are gone, replaced by slicker joints catering to tourists. The latter are a curse but a lifeline to a place strangled by Franco-German banks. I prefer the hundreds of stray dogs and cats sunning themselves around the Acropolis.

“Do these crap bankers and E.U. shills take us all for idiots?”

In The Spectator two weeks ago, Martin Vander Weyer pointed out that the new era for Greece is nothing new, given that the Greek public debt went from 130 percent when the crisis began to the present 180 percent of the GDP debt. Perhaps this is an improvement if one works in the Ministry of Truth in Orwell’s 1984, but I don’t. Do these crap bankers and E.U. shills take us all for idiots? Eight years of economic strangulation in order to pay the German banks, half of the middle class of doctors, engineers, and scientists gone abroad, and the extreme left-wing clowns and charlatans who have run the place since 2015 are saying that the chaos is over and everything’s hunky-dory. String them up with wire and I’ll gladly watch.

Yet Greek spirits are up, especially during summer. I was driven down to the Peloponnese where a fast boat was waiting, and arrived on the private island of a childhood friend in a jiffy. Throughout the trip I joked with hardworking Greeks who never complain and have only positive things to say because they’re employed and treated fairly. Once on the island, I spent five days and nights cracking jokes and asking the staff to put a strong laxative in the visiting royals’ drinks, but they refused. So I did the next best thing. James Marlborough and I told visitors that their drinks were spiked with laxative, only to watch the King of Holland not blink an eye and down six gin and tonics in a row. His queen, Maxima, also did not do badly in the drink department, but she and I did not agree on some past history, though I remained polite as not to embarrass my hosts. My own king, Constantine, could not have been nicer, even if he did bring up my recent birthday, an obviously embarrassing subject.

There were friends galore staying on the island, including two Austrian ladies, one a Habsburg widow, who are friends of my son-in-law. So when I informed Jamie and Edla Marlborough that my daughter’s new home makes their Blenheim look like a doghouse, they roared with laughter. After all, if one has Blenheim, one can take even a ridiculous joke like mine. I spent time teaching their boy, Caspar, how to punch, so he hit me at least fifty times—as hard as he could—on the stomach, and by the end of five days I began to feel it. Caspar is 8.

Never mind. Greece is so wonderful in summer, the water and beaches pristine, the people friendly and unspoiled, the food and wine fantastic. But I’m sad when I see what most are going through, and realize how lucky I am. On my last day I went down to the old part of Athens to see a 91-year-old barber who used to be junior to Demosthenes, the one who used to shave my father daily. (Gentlemen back then had their barbers shave them.) Old George knows how to cut hair like no one on earth. He gave me a short back and sides haircut that had young girls whistling at me when I emerged. (Just kidding.) But why is it that old barbers know how to cut hair? These modern so-called hairstylists should be arrested for false advertising about matters tonsorial. Old George talked about my dad and about Demosthenes, and then mentioned the woman who worked in that beautiful barbershop, one who used to give me enormous erections without me realizing what was happening because I did not know the facts of life. I thought it had something to do with the ice cream they used to give me while I watched old Dad getting spruced up. What fools the young are.