Greece, Then and Now 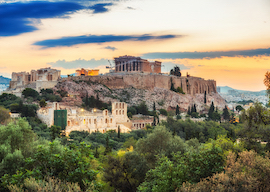 ATHENS—Standing right below the Acropolis, where pure democracy began because public officials were elected by lot, I try to imagine if random political selection today would be a good thing. The answer is a resounding yes. Both Socrates and Aristotle questioned fundamental norms and values, and if they lived today they would certainly question the acceptance by us of career politicians who have never had any other profession. (Corbyn, Biden, I could go on.) Socrates was skeptical about many things, especially the arts, because he believed they led us away from the truth. Yet so-called “artists” today influence public opinion as never before. Even numbskull rappers have a say and can alter public opinion, hence election by lot should be a must.

Old Socrates was obsessed with the truth, and politics is all about the propagation of falsehoods. Aristotle believed that many people are slaves by nature, and the proof lies in the blind obedience of those hatchet-faced people who scream abuse on TV to leftist dogma. (Aristotle would not get invited to chic parties were he around today; he opposed homosexuality, believed women to be biologically inferior, and despised rule by the many.) The ancient Greeks may have invented everything useful, but they did not invent socialism, the system that makes theft legal. They were too smart to fall for its Siren-like attraction because they knew it would eventually kill all initiative. Yet politicians nowadays demand more socialism, even after the examples of the Soviet Union, Cuba, and Venezuela. Go figure, as they never said in old Athens.

I suppose it all has to do with human nature. The politician who accepts power reluctantly and uses it sparingly is only to be found in Greek myths and in Shakespeare plays. Casting power aside without regrets is unheard of in real life. Which brings me back to Athenian democracy and random selection. Back then it was for one year, but citizens also had the right to ostracize any citizen who got too big for his britches for ten years. (No celebrity worship was tolerated. Aristophanes’ satires cut egos down quicker than one can say “Alcibiades.”) The hero of Salamis, Themistocles, was voted out of the city because he got too popular. It was called a preemptive measure. Shame-free self-promoters were as rare back then as they are ubiquitous today.

“Walking around the Acropolis can be tiring, but I do it every time because it reminds me of good things.”

Never mind. The Athenians did not exalt power or leader worship, and cult of personality was a no-no. The state was not seen as omnipotent or omniscient, but as a sort of church for its loyal citizens. I’ve often wondered why the Athenian experiment in democracy was not followed by later states. It was radical and fair, but man is hardly the latter, so there you have it. The Athenian system is seen today as selective democracy, but not more so than the present one, says the old Athenian philosopher Taki.

Twenty-seven years of war with Sparta did Athens in. A military oligarchy that feared Athenian cultural dominance cut my birthplace down to size. Athens had tried to export democracy around the Greek city-states, just like Uncle Sam is doing as I write. The good uncle is bound to fail, just as Pericles did. But who was the last man to learn from history? The Unknown Soldier, that’s who. And old Socrates, although potbellied by then and against the war with Sparta, fought as a common soldier, just like the rest of the philosophers and playwrights. The elite fought on the front lines back then, they did not send poor farm boys to do the dying. I can picture Margaret Thatcher leading a charge up Goose Green, but William Kristol? Fat John Podhoretz? David (disgusting) Frum? Dick the coward Cheney?

Otherwise, in today’s Athens, poverty is rife, unemployment is at 19 percent, and many of the well educated are working abroad. The new prime minister, Kyriakos Mitsotakis, I do not know. I knew his father, an ex-premier, well, and kept a very nice suite for him in a hotel I owned for years. I once went to see Kyriakos’ sister, who was then a minister, and she treated me the way Saudis treat their servants. I got up and left her office without saying a word. She was famously rude to people, probably because she was extremely unattractive. My father’s antiquities that I had pledged to that government to be displayed in the Ministry of Foreign Affairs went to the Benaki Museum instead.

The trouble with Greece is overregulation and corruption. Ironically, Greek oligarchs have a very limited grip on the economy. Oligarchs are not the major obstacle to growth; bureaucracy and overregulation are. The last four years of socialism have done only harm. That bum Tsipras sold the country down in exchange for outriders during his visits to foreign capitals. He’s now set for life, and the Greeks, being Greek, will vote him back with his new false promises in the future.

That’s about it. Walking around the Acropolis can be tiring, but I do it every time because it reminds me of good things. And as I sit under the sun and feel the dry, oppressive heat, I think of the great Pericles and the Golden Age of the city. It took my mother’s birthplace, Sparta, to bring it all down, so if Athens had to lose she could not have lost to a more gallant foe. Pericles for president, Pericles for president, he’s the one that people choose, loves the Irish and the Jews!