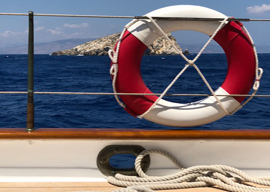 On board S/Y Puritan—I’m sailing off the charred eastern coast of Athens where so many died last week, and I remain suspicious as hell. Fifteen or so fires starting simultaneously smells of arson to me, and arson stinks of Albanian. Yes, I know, I know, it’s racist and all that, but I don’t give a shit. Mostly Albanians are committing violent crimes in Greece. Scum who murder for a TV set, or set fires in order to loot. Political correctness partly protects them from being rounded up and identified, so sometime soon we Greeks will have to take matters in our own hands. Frontier justice will prevail and it will all be PC’s fault.

Mind you, the community of Mati, where most of the dead lived, was illegally built forty-some years ago, and was only issued building permits after the fact. It was mostly a middle-class community of retired doctors and lawyers, but it lay in a gully that funneled the flames all the way to the sea. Extremely high winds did not help. The authorities talked a good game but will do nothing. If I were in charge, I’d arrest every Albanian in Greece and deport them. Violent crime would disappear overnight, but then I’m not in charge and PC is. Not that the U.K. is doing any better. Who would believe that Sarah Champion, a member of Parliament who pointed out the simple fact that the young white girls who were abused—all 1,400 underage and abused by Asian men—would need police protection for uttering the truth? If this isn’t sick, I don’t know what is. The bad guys have PC protection, the good ones nada. Not to mention the publicity-starved Diane Abbotts of this world defending the two bloodthirsty ISIS monsters that our American friends know what to do with once they get their hands on them.

“Sailing around this beautiful part of the world does not exactly make one see what the E.U. has done to this country.”

A 55-year-old acquaintance of mine, a father of three young men, is attacked in his house by two known Albanian criminals; he almost kills one of them with a punch to the head, and is then slain by the other with a blow to the head with a steel pipe. The Albanians get away and we are fed the usual bullshit that not all migrants are murderers. Despite the loss of cultural coherence, however, life does go on and I’m sailing around the Aegean on Puritan, one of Alden’s greatest designs: a 1929-built, 38-meter schooner that I sail on every summer whose crew is mostly Brits and South Africans and whose Italian captain is the best since Captain Blood. However embarrassing it sounds, without good-time ladies on board, I’m quite content to sail with my son and daughter, my son-in-law, my two grandchildren, and Grandma. Who knew I would end up like this? I certainly didn’t. In Kimolos and Milos, the white clay rocks turned the sea into a diaphanous marvel, but the nightlife in both places made me yearn for a shithole like Monte Carlo.

Never mind. I am reading Cavafy, the gay Greek poet whose poem “Ithaca” is a classic. Cavafy emphasized the journey rather than the destination, a sort of reversal of the Homeric myth, using the trip as a metaphor for a life that must be lived to the fullest. It offers no help to an oldie like me, who still yearns for adventure and fun. My two rude grandchildren asked me what it was like to live with dinosaurs, and whether Alexander the Great was a friend of mine. “Pappou [Greek for ‘grandpa’] preordered the Bible,” they announced. As they’re half dago, I reminded them that we kicked the crap out of the Italians in 1941, and I was about to do it again.

Paros is among the nicest of the Greek Isles, the ghastly tourist trade of new rich landing northwest from here, in Mykonos, an island that retains its title as the official whorehouse of the Mediterranean. My crew is unique because they put up the sails at the slightest whiff of a breeze, an unusual phenomenon nowadays, when crews on gin palaces are known to cower in terror when white flakes appear on the horizon. Sailing around this beautiful part of the world does not exactly make one see what the E.U. has done to this country. One sails into the wind, tacking and reaching, and one forgets that the country is not only broke but will continue to be broke for generations, sacrificed at the altar of the Euro. The Greeks are Mrs. Rochester, hidden in the attic, and only Golden Dawn and yours truly are protesting. The rest have been bought off, starting with that arch collaborator Tsipras, whose name I hope will one day be one and the same with Ephialtes, the traitor of the 300 Spartans at Thermopylae.

There you have it, dear readers. I am plunged in bourgeois morality, sailing around with my family without a tart in sight, and happy to boot, while my country has sold out to those faceless men in Brussels. Observing the civic blight amidst the physical splendors that are Greece is like seeing a beautiful woman with bad teeth. It’s time for a change.