Green on the Outside, Red on the Inside 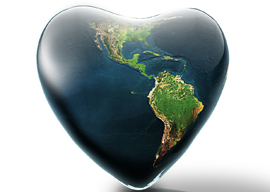 Tuesday was World Environment Day. I loathe the environment.

The United Nations has been stoking the flames of Earth worship since the early 1970s, when global cooling was all the rage. This year’s theme is “Green Economy: Does it include you?” My answer is a resounding “NO.” The greenies” question is less of a pleasantry and more of a threat: If your business doesn”t conform to the green agenda, you”ll face a heavy fine.

Despite the veneer of compassion, environmentalists are often power-hungry statist egalitarians. They are “watermelons“”green on the outside and red on the inside.

“Despite popular belief, not even American Indians were environmentally friendly.”

EPA official Al Armendariz was caught on camera advising the government to “make examples” out of the energy companies that weren”t abjectly compliant with the agency’s strict regulations:

The Romans used to conquer little villages in the Mediterranean. They”d go into a little Turkish town somewhere, they”d find the first five guys they saw and they would crucify them. And then you know that town was really easy to manage for the next few years….And, companies that are smart see that, they don”t want to play that game, and they decide at that point that it’s time to clean up.

This sentiment ignores the fact that although the Romans were masters at conquering lands, they also created beautiful and industrial cities on top of them. Roman rulers supported deforestation to provide for a growing and prosperous society. The EPA isn”t like ancient Rome at all; most likely it would have been pummeled by Rome.

Rabid environmentalists use the “boiling frog“ method these days. Instead of outright banning important sectors such as oil refinement, greenies make it illegal to partake in smaller transactions so that we don”t get too mad too quickly.