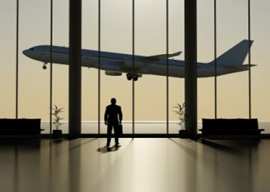 Here are my experiences with airport security at various spots around the world during the past several years.

CHICAGO
It is a hot day in early September, and I”m standing at O”Hare in a line of approximately one hundred tired and exhausted passengers after a nine-hour flight from Europe. We are going through the eighth or fifteenth level of the interminable security procedures that are now mandatory everywhere”shoes removed, belt removed, pockets emptied, all for the umpteenth time in the past few hours. The majority of the passengers in line with me are Asian, and many appear to have only a rudimentary grasp of English.

The security official is a morbidly obese Caucasian twenty-something who looks like Penn, Teller, and GÃ©rard Depardieu all stuffed into the same undersized jacket and pants. His shirt is untucked. He has visible tattoos, an eyebrow piercing, and wears Converse sneakers. America has devoted immeasurable time and money to tightening its borders post-9/11, yet it still has no problem employing airport officials whose attire would seem informal even at an OWS protest.

He is scrutinizing someone’s passport for what feels like an eternity with the furrowed-brow intensity of someone trying to read Anna Karenina with the book upside down. When the increasingly impatient and irritable crowd surges forward slightly, he looks up and bellows, “Yo! Don”t bum-rush me, people!”

“My suffering is slightly softened by the fact that I”m being yelled at by a guy with a Ricky Ricardo accent.”

The passengers look befuddled. They likely don”t have the slightest idea what “bum-rush” means. Their English might well be perfect, but maybe they are still adjusting to a country where airport security officials dress like homeless vagrants who use hip-hop slang from 1986.

DETROIT
I am forced to present my Canadian passport to a gentleman of apparently Mexican origin. Reminding him about the other country that borders the USA”the one where people are generally allowed to cross the border without getting shot”probably doesn”t help. Within seconds it becomes clear that he has quite the tortilla chip on his shoulder and isn”t shy about taking his resentment out on everyone in his line. (The Chinese couple several spots ahead of me are visibly in tears as he holds up the line berating them.)

I reach the front of the line and offer my passport. “Who told you to get into this line?” he bellows. When I point to the uniformed woman who directed me into the line, he insists that her uniform is the wrong color for directing people into lines. He’s lying. A quick survey of the room reveals all of the staff are wearing the same color uniform. He appears to take great delight in prolonging my interrogation for what feels like an hour. My suffering is slightly softened by the fact that I”m being yelled at by a guy with a Ricky Ricardo accent.

ROME
I fly into Ciampino Airport on a sweltering day in early May. The tanned and surly border official wears his hat at what male homosexuals might refer to as a “jaunty” angle. Distracted by the blonde standing behind me, he barely grunts while pretending to read my passport. He winks at the blonde while dismissively waving me through. He is straight out of ethnic-stereotype central casting. So long as you bring an attractive female companion, you can apparently waltz into Italy unscathed holding a suitcase stuffed with crystal meth and Kalashnikovs.