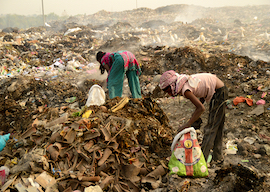 It is dangerous to stereotype nationalities without seeming to be an imperialist pig. However, some international news stories require no dateline for one to know immediately where they occurred.

Lying in bed in the morning sipping coffee, my news-junkie girlfriend will suddenly look up from her iPad and say, “Guess which country!”

Then she will read a headline such as, “Venomous spider eats equally venomous snake.”

The next day, looking adorable in her flannel pajamas, she reads, “Furious mob tie a man and his female cousins to a tree, brutally thrash them with ropes and sticks and ‘molest the two women’ for helping him run off with a married woman.”

“India,” I say with conviction.

Regular readers of the Daily Mail see these stories of Indian vigilante justice all the time.

The next morning, while I’m reading about how SAT scores will be fixed with an “adversity score” bonus for disadvantaged students, my beloved says, “World record holder reveals jaw-dropping snaps of 28 fingers and toes.”

“India, of course.” The Asian subcontinent is a smorgasbord of deformities that would have been surgically repaired in the U.S. or Europe.

“You won’t see these stories in The New York Times—whose editors like to think that everyone is the same everywhere.”

The Indians don’t have enough doctors—maybe because they are all working in America—and they have a different attitude toward imperfections. I’m reminded of a British friend who told me, “All dentistry is cosmetic dentistry.”

It’s raining. I’m warm in bed with my little cuddle muffin thinking it’s time to get busy, but she just wants to horrify herself with the most grotesque stories she can find.

You won’t see these stories in The New York Times—whose editors like to think that everyone is the same everywhere, and that Western civilization is no better than what goes for society in Jakarta or Timbuktu.

They hum “It’s a Small World (After All)” as they spike any story that highlights the barbarity of the third world, and they avoid using the word “tribe” in favor of “ethnic group.”

It’s a new dawn. It’s a new day, but man’s inhumanity to man is ceaseless, and my sugar bunny is like a bloodhound in finding the most depressing tragedy to darken any morning.

“Guess which country… Cannibal girl, 12, boasts to classmates she ‘cooked and ate human flesh’ while being held by pedophile and tells them what brains taste like.”

“Russia,” I answer. We have plenty in the U.S., but the former Soviet Union seems to produce the most twisted serial killers, child molesters, and sadistic mutilators. It must be something in the vodka.

I’m reading about the Kennedy-like charisma of Beto O’Rourke and thinking of bacon and eggs when honey buns says, “Guess which country… Death toll rises to nine in school stabbing attack.”

With no hesitation, I say, “China.”

Gun control is strict in China, so psychos there use knives, hammers, and even poison—and they like to go after children.

The real reason is that Mao’s one-child policy led to the infanticide of girl babies and a generation of young men with no one to date or marry. Blue balls cause homicidal rage.

“Guess… Rich family gets angry at maid so they tied her to tree in hot sun as punishment.”

After answering, “Saudi Arabia,” I decide to switch it up and give my sweetie pie a turn to guess. “Eyebrows raised at strange nude painting in senior banker’s office.”

Her forehead creases in thought. “I need more details,” she says.

“An investment banker had a painting of the Minotaur in his office,” I say. “A large bull with human, male genitalia.”

“If it had been a nude woman on his wall, it could have been almost anywhere,” she said. “I figured the banker went to a British boarding school with other shirt-lifters.”

You see, stereotyping nationalities is dangerous, even when it’s accurate.