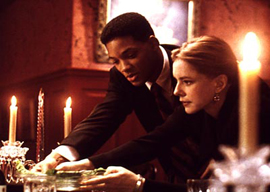 Will Smith and Stockard Channing in Six Degrees of Separation

In John Guare’s play Six Degrees of Separation, a young black con man traduces his way into a white, rich, liberal family’s midst by posing as Sidney Poitier’s son, who had just happened to lose his wallet. The guilt-ridden rich folk put him up”with predictable results. The family is almost torn apart as the con man brings in a gay lover and steals them blind. The Broadway show was a success, as was the movie, which featured Donald Sutherland and Stockard Channing as the rich liberal couple and Will Smith as the con man.

Just about that time, twenty years or so ago, I was writing for a New York city weekly, as well as for London’s Spectator and Sunday Times, the latter requiring close to 2,000 words per week, an unheard-of load for someone who was also pursuing a busy social life in the Big Bagel. Four thousand words per week made Taki a very dull boy late at night. So I advertised for a researcher”the first and last time I ever did this.

No sooner had the ad appeared in The New York Observer, the liberal Bagel weekly in which I contributed a regular column, than a terribly polite voice over the telephone volunteered his services. I invited him to my house for lunch the next day. As it happened, my father-in-law, Prince Schoenburg, was also coming. The prince was a white, guilt-ridden liberal straight out of central casting. This was because his family had once upon a time ruled over the land of Bohemia, now known as the Czech Republic. To my surprise, the researcher turned out to be a young black male of an incredibly gay mien. He had half an ear missing, an injury I recognized from my martial-arts background to have been inflicted by violent means.

“The trouble is that it was NR, not some lefty rag, that got rid of a wonderful and courageous man.”

Oh, I almost forgot”the Guare play and movie were based on a true story, with names having been changed by the playwright to protect the well-meaning fools that had fallen for the con man. Except for that of Sidney Poitier, whose name the trickster had exploited in real life. Once the lunch began I noticed that my prospective researcher drank wine even faster than yours truly, becoming thoroughly sloshed in no time. He also regaled my kind father-in-law with tales about tea plantations in Brazil that his family owned, although he couldn”t place them on the map, nor did he seem to be aware that Brazil exports coffee. The prince listened patiently and politely while the man blabbed on until finally he passed out on the sofa next to the dining room.

By this time the penny had dropped, and after letting him sleep it off, I then ordered him out of the house telling him I knew who he was and that I was no West Side rich liberal fool. He tried to ring me afterwards, but after I threatened him with both violence and the police, he begged off for good. I later read that the poor guy had died of AIDS. His real name escapes me.

But then the movie came out and I wrote about my experience with the con man in The New York Observer. The female editor at the time was a ghastly left-winger who had already made my life miserable at Esquire magazine, where I used to be a regular columnist. She didn”t like the story, especially as I emphasized the black con man as opposed to the white liberal prince. She told me to tone it down, and I refused on the basis that every word I had written was based on fact. The story ran but not many of the paper’s readers were impressed by it. As far as they”re concerned, black is good and white is bad and facts can go to hell.