Guggenheim’s Waiting for “Superman” is Shoddy Filmmaking at Best 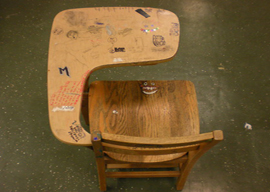 Davis Guggenheim’s much-publicized documentary with the meaningless title of Waiting for “Superman” makes the (by now familiar) liberal centrist case for school reform: the cause of the achievement gap is bad schools, which are the fault of bad teachers, who are protected from termination by bad teachers” unions. The solution is charter schools that fire bad teachers and hire not good but “great” teachers!

Ten years ago, there would have been a certain frisson if somebody so plugged into the Democratic Party”Guggenheim won an Oscar for directing Al Gore’s global warming documentary, An Inconvenient Truth, and helmed the Barack Obama biographical short shown at the 2008 Democratic convention”attacked the Party’s mainstay, the teachers” unions.

The unspoken goal of the most effective charter schools is to isolate minority students away from their own cultures and pound middle class values into thems.

Yet, anybody who has flipped through Newsweek or New York Times Magazine over the last decade won”t find anything new. The heroes of Waiting for “Superman” are the usuals: Michelle Rhee, the Korean-American school chancellor despised by black voters in Washington D.C., and Geoffrey Canada, the black Harlem school impresario. They are congratulated by other talking heads, such as Bill Gates, Washington Post education reporter Jay Matthews, and Newsweek’s Jonathan Alter.

Interwoven are the stories of five young students at neighborhood public schools. They are told, in effect, that if they don”t get picked in admission lotteries by celebrated charter schools such as Harlem Promise Academy, KIPP LA Prep, or Washington D.C.’s SEED public boarding school that they might as well start dealing crack right now.

The unspoken goal of the most effective charter schools is to isolate minority students away from their own cultures and pound middle class values into them over endless school days. The SEED boarding school for the urban poor, for example, costs taxpayers and donors $35,000 per student per year. Still, a 2009 NYT Magazine article about it lamented how much more money is needed to prevent the students from regressing back to street corner culture by not letting them go home each weekend. Only 20 of each class of 70 graduate.