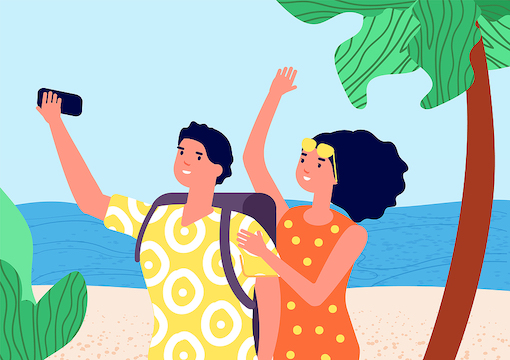 The selfie is perhaps the defining cultural artifact of our time. Me and the Mona Lisa, Me and the Pyramids, Me and the Colosseum, with the emphasis on the Me, of course; at least COVID-19 has put paid to all that for a time, as well as to little Greta’s public harangues, which somehow manage to combine the qualities of the zombie and the hysteric. Alas, it could all come back.

Sometimes one reads about the taker of a selfie who has died as a result of a fall down a precipice because he was trying to get a better picture of himself. I know that in theory accidental death is something tragic and much to be lamented, but I would not be telling the truth if I were to deny that I did not experience a frisson of pleasure on reading of such a death, that is to say of a martyrdom to egotism.

Oddly enough, the best commentary on selfies I ever saw was a cartoon in the English-language newspaper of Bahrain. A young man was taking a selfie beside the corpse in an open coffin just before the funeral. If it were not a paradox, I should say that shallowness could go no deeper.

I have an aversion to having my photograph taken, let alone to selfies. This is not because of laudable modesty; rather, it is another manifestation of vanity, albeit a negative one. Until I see a photograph of myself, I can think that I am better-looking than I am, and am alarmed at what I actually look like. It is the same with public speaking (which I do rarely): I believe, as I speak, that I don’t sound too bad. Then I hear the recording and think, “Who’s that pompous buffoon?” No, selfies are not for me.

But posing and posturing have become a mass phenomenon, the tattooing of our time. Of nothing is this more true than contemporary Woke morality. Whereas not long ago young people of the middle classes sought to express their sympathy for the lower and supposedly oppressed orders by imitating their tattoos and way of dress, imitation being the highest form of empathy available to egotists, they now express the same desire by making Wokeness the touchstone of their morality. They think they are rebelling when, of course, they are conforming. They do not realize that it is more difficult, and more courageous, to contradict a friend than to criticize a society.

“It is more difficult, and more courageous, to contradict a friend than to criticize a society.”

The sight of young middle-class people taking the knee—an expression with which we are now lamentably familiar—and putting their hands up as if they are about to be shot, disgusts me. It is the same kind of bogus sensibility, if that is the word for it, that encourages people to wear carefully torn jeans, as if by doing so they were expressing solidarity with the poor. Instead of proper gratitude for being able to afford decent food and clothing, thanks to the efforts of all preceding generations, they prefer to pretend to feel guilt. If anything has been institutionalized, it is not racism but guilt, though guilt of a peculiar, ersatz, dishonest kind.

Guilt is an appropriate response to one’s own bad actions or omissions, and its level should be proportionate to the bad action or omission. For example, the other day I put the phone down on someone who called to sell me something. This was rude of me, and there was no occasion for rudeness. The woman was only doing her job, from which I think it is unlikely that she derived much satisfaction, let alone much pay. The inconvenience to me of her call was a very mild one. My rudeness probably made her day a little worse than it need otherwise have been. I could, with very little effort, have thanked her but said that I was not interested in what she was trying to sell.

Clearly, it would have been unreasonable of me to be consumed by guilt afterward, or to toss and turn at night for thinking about it. (Disproportionate guilt is a vice, a manifestation of the sin of Pride.) Nevertheless, I did feel a little stab of guilt and resolved to be more polite next time; though in my own defense, I must add that normally I am reasonably polite in such circumstances. The other day, for example, I received for the first time an evangelical telesales call, salvation being the product on offer, and I even had a pleasant little chat with the saleswoman.

While I feel guilt for my own bad actions or omissions, the kinds of things that are under my direct control, I do not feel guilt that my own life has been a comparatively fortunate one, probably more fortunate than that of the majority of mankind. On the contrary, I feel gratitude, or perhaps, more accurately, I should say gladness. I feel sorrow for the unfortunate, but not guilt toward them since I am not responsible for their sorrows. True, I did nothing to deserve having the opportunities that I have had, but I did nothing not to deserve them, either. I took the world as I found it and for me to feel guilty about my comparative good fortune would be a sign not of moral sensitivity or virtue, but of moral grandiosity. Moral grandiosity has probably done more harm in the world than indifference, inasmuch as it recognizes no limits to its power to bring about a supposedly better world.

A moral posturer might say that a world in which human beings are reduced to telesales is a terrible one. Telesales shouldn’t exist and therefore how one reacts to a telesales woman is unimportant or beside the point. It is more important to work for the abolition of the work itself than to be polite to those who do it.

But while the good effects of being polite are certain, the effects of abolishing telesales are not. Indeed, they are inherently uncertain, for such measures, if taken, always have unforeseen and unintended consequences. Nevertheless, posers and posturers prefer to concentrate on distant problems because they require nothing of them except the expression of the right opinions and sometimes a protest, demonstration, or even riot, which of course is a pleasure rather than a discipline, in the way that acting virtuously is a discipline.