Gun Control and the Scope of Ethics 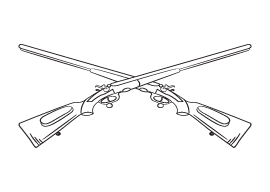 In 2004 in rural Berkshire, England, a rush-hour commuter train from London to Plymouth collided with a stationary car at a level crossing and all eight carriages, bearing two hundred people, were derailed. Both the driver of the car, the driver of the train, and four passengers died at the scene, with one further passenger later succumbing to injuries in hospital.

What has this to do with guns, you may ask? Well, it is linked, in my mind at least, by the ensuing investigation into the crash and the reaction to it.

A couple of those who died were thrown out of the train through windows which had broken during the accident, and the investigation judged that had they merely bounced off unbreakable windows, they would probably have survived.

What was more, it was discovered in a statistical analysis that the ability to break windows and exit a derailed train has, historically, led to more deaths than lives saved. This is because people often left a train at the scene of an accident, or even during a delay, and then got run down by a train on another track, or, where tracks were electrified, got themselves electrocuted.

Therefore, with the inexorability of valid argument, in order to maximize safety, train carriages in the UK should have their windows laminated, rendering them unbreakable.

Now, my initial reaction to that suggestion comes from deep within my soul: an anti-authoritarian, autonomous, and freedom-seeking soul if ever there was one.

The idea of being trapped against my will in a contained space for no imprisonable offense goes against everything I believe in politically, and everything I am constructed of psychologically.

I would prefer the strong chance of dying by being hurled through an empty window over even a minuscule chance of beating ineffectually against the laminated glass as the carriage was, for example, consumed by an electrical fire. Better the certain but lethal illusion of the ascent to heaven than even the slightest possibility of the flames of hell.

“I would prefer the strong chance of dying by being hurled through an empty window over even a minuscule chance of beating ineffectually against the laminated glass as the carriage was, for example, consumed by an electrical fire.”

When I analyze that reaction, if I am honest, I realize that my so-called political views on this matter are as much informed by the psychological reality of my claustrophobia as by the philosophical speculations drawn from my readings of Tom Paine or (my distant cousin) John Locke.

They are also shaped by the fact that I know it’s pretty damned unlikely that, were I to clamber to safety from a derailed train, I would get hit by another train going the other way, or tread on a ceramic-pot-insulated “live line” and get fried like so much KFC.

I”ve run with the bulls of Pamplona for the past five years unscathed, and have a pretty good grasp on the physical modulation of risk in high-adrenaline situations”well, if you ignore the year Ernest’s grandson John Hemingway pulled me to safety, but that’s another story (contained in our new book, subtitled “How to Survive the Bulls of Pamplona“).

However, ethics by definition are not solely, nor even largely, about what is good for me. The chances of my being in a train crash are infinitesimal, but the chances of there being train crashes in which I am not involved are as near to 100% as dammit. So what happens if my demands for a liberty which will likely never be exercised lead to the death of others, including, for example”to highlight the point with a completely realistic sentimentality”the death of small children? Am I that selfish? As my old lecturer Isaiah Berlin used to say (quoting the lesser-known thinker R. H. Tawney), “freedom for the pike means death for the minnows.” And not only because it eats them.

The parallels with the issue of gun control are obvious.

America has good historical reasons for the existence of its 1789 Bill of Rights”the year of the French Revolution, in case you have forgotten”just as my country Britain had for its own a century earlier, both of which enshrine the right to keep and bear arms.

I myself am a gun owner and was raised as such. I was taught how to use a 20-gauge when I was 10 by my father, and then a .22 short rifle at my school when I was 13, with every safety lecture a child could possibly need. At 16, I entered the military Combined Cadet Force of my school, where we were taught to strip, clean, reassemble, and fire the “individual weapon” of the British Army. (No sight could have been stranger to passing tourists than classes of a dozen teenagers walking down Eton High Street toting 5.56mm SA-80s to those lessons.)

Firearm safety and responsibility were hammered into you from the moment you asked the quartermaster for your gun, and he invariably replied, “This is your rifle””pointing into the armory””and this is your gun,” pointing at his crotch; “one is for shooting people and one is for fun.”

I went on to be Captain of Shooting of my house at school, and myself instructed a new generation of young teenagers into the use of the small-bore rifle; I was very aware of the responsibilities that entailed.

So when I look over the Atlantic at the perennial debate about controlling access to firearms, it is with complete mystification, and not because I don”t understand guns. My problem is with why so many of you seem to fight so hard against stopping people who are completely ignorant of gun usage and safety or, worse, have histories of criminality or mental health problems, from walking into shops, buying a gun, and then being allowed to carry it with them wherever they wish to go.

It’s not like a significant proportion of Americans are against requiring people to learn, and prove to a government official that they”ve learned, the responsibilities and realities of wielding other machines that are of great danger to others. Ever heard of drivers” licenses? And cars aren”t even designed to kill”that is a corollary, a mere side effect, of their true function. Guns aren”t designed as hole punches …