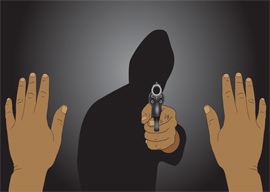 With gun control, murder, and race much in the news, it’s worth noting that the Obama Administration has solved its longstanding problem that, according to the federal Bureau of Justice Statistics, blacks commit the majority of homicides in the US.

For years, the press has been explaining that more gun control is necessary to keep white men from killing everybody. For example, last Friday the Washington Post featured an opinion article that began:

Imagine if African American men and boys were committing mass shootings month after month, year after year. Articles and interviews would flood the media, and we”d have political debates demanding that African Americans be “held accountable.” 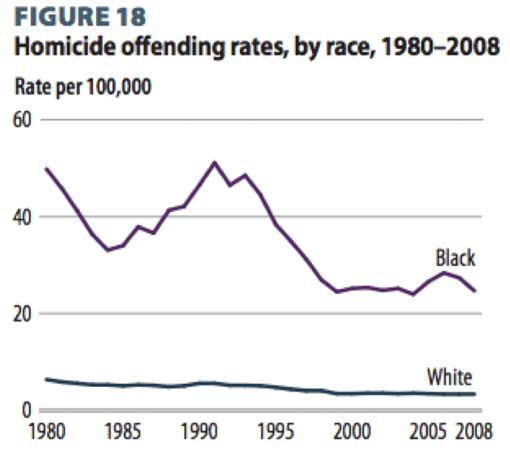 Friday is a slow day in the news business, so it appears to have become an attention-seeking tradition in the prestige media to post extremely stupid anti-white articles on that day, such as the one involving that “mysterious” murder of the black gay politician in Mississippi from four Fridays ago.

Much to the displeasure of the press, however, unwelcome commenters on articles about guns and murder often post links to the Administration’s own “Race” Web page on the Bureau of Justice Statistics” Homicide Trends website. There, federal bean counters stated:

In 2005, offending rates for blacks were more than 7 times higher than the rates for whites.

Initially, the Obama Administration dealt with the difficulty that blacks were committing murder so much more often than whites by not updating the Homicide Trends website. For years, BJS” Web page was stuck on 2005.

“You know that stereotype of young black males as dangerous? According to the White House, it’s true.”

(By the way, isn”t “Bureau of Justice Statistics” a pretty awesome-sounding agency title, at least from a superhero/nerd standpoint? Granted, it’s not “Strategic Air Command,” but it’s still kind of cool.)

But that didn”t stop troublesome Internet commenters from quoting the 2005 statistic.

Recently, however, the Administration has come up with a much better solution.

No, the White House didn”t actually figure out how to stop blacks from committing such an outsized fraction of all murders.

Obviously, gun control isn”t going to do the trick. Many homicides are a byproduct of the illegal drug trade. And blacks are responsible for 65.6 percent of drug-related homicides according to the BJS.

And, as you may have noticed, the drug business seems to thrive despite stringent drug control. Federal agents are constantly smashing down doors and seizing drugs. Unlike guns, which last for decades, most of the narcotics in the country get consumed every few weeks or so. And yet, a new supply of illegal drugs always seems to show up.

(If you wanted to stop drug trade murders in the US, you”d let Costco sell 100 grams of Johnson & Johnson brand cocaine for $99.99. Of course, applying the Magic of the Market to lowering the legal price of cocaine would cause other problems, such as thousands of coeds suffering brain aneurysms every Spring Break.)

No, rather than solve the problem of blacks committing a disparate number of murders, the Obama Administration has instead deleted the offending Web page. Now, when you type http://bjs.gov/homicide/race.htm into your browser, you get “This webpage is not available.” (It is still archived here.)

Why did this useful federal website vanish? Maybe it’s the Sequester. What better way to balance the budget than to fight the High Cost of Computing by shoving unwelcome Web pages down the memory hole?

If you are persistent, you can still dig up this information by downloading various PDF files created by BJS statisticians. (I”ve found the old BJS website buried in a PDF here; but dumping it into a non-interactive format makes it ugly and hard to use…which seems to be the point.)

At present, the best source for Obama Administration data on homicides by race is a 2011 PDF by Alexia Cooper and Erica L. Smith of the BJS: “Homicide Trends in the United States, 1980-2008.”