Guns and the Government 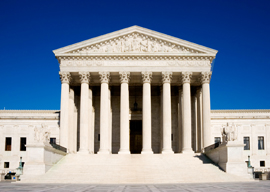 If you have listened to President Obama and Vice President Biden talk about guns in the past month, you have heard them express a decided commitment to use the powers of the federal government to maintain safety in the United States. You also have heard congressional voices from politicians in both parties condemning violence and promising to do something about it. This sounds very caring and inside the wheelhouse of what we hire and pay the federal government to do.

But it is clearly unconstitutional.

When the Founders created the American republic, they did so by inducing constitutional conventions in each of the original 13 states to ratify the new Constitution. The idea they presented, and the thesis accepted by those ratifying conventions, was that the states are sovereign; they derive their powers from the people who live there. The purpose of the Constitution was to create a federal government of limited powers—powers that had been delegated to it by the states. The opening line of the Constitution contains a serious typographical error: “We the People” should read “We the States.” As President Ronald Reagan reminded us in his first inaugural address, the states created the federal government and not the other way around.

“The areas of health, safety, welfare and morality were not delegated to the feds and were retained by the States.”

Notwithstanding the Constitution’s typo, the states delegated only 16 unique, discrete powers to the new federal government, and all of those powers concern nationhood. The Constitution authorizes the feds to regulate in areas of national defense, foreign affairs, keeping interstate commerce regular, establishing a post office, protecting patents and artistic creations, and keeping the nation free. The areas of health, safety, welfare and morality were not delegated to the feds and were retained by the States.

How do we know that? We know it from the language in the Constitution itself and from the records of the debates in the state ratifying conventions. The small-government types, who warned at these conventions that the Constitution was creating a behemoth central government not unlike the one in Great Britain from which they had all just seceded, were assured that the unique separation of powers between the states and the new limited federal government would guarantee that power could not become concentrated in the central government.

It was articulated even by the big-government types in the late 18th century—such as George Washington and Alexander Hamilton—as well as by the small-government types—such as Thomas Jefferson and James Madison—that the new government was limited to the powers delegated to it by the states and the states retained the governmental powers that they did not delegate away. At Jefferson’s insistence, the Bill of Rights was added to the Constitution to keep the new government from interfering with natural rights such as speech, worship, self-defense, privacy and property rights, and the 10th Amendment was included to assure that the Constitution itself would proclaim affirmatively that the powers not delegated to the feds were retained by the states or the people.