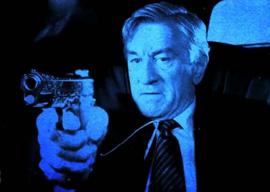 Covert agendas play a sizable role in the gun-control debate. If you were to pay attention solely to the handful of homicide cases the press emphasizes, you would assume that the country’s biggest problem is white males committing mass shootings. Yet the total death toll from all mass shootings in the entire country over the last three decades is only about as bad as 2012’s murder count in Chicago alone.

As I pointed out in “Guns and Race“ a couple of weeks ago, an obscure Obama Administration report noted that blacks accounted for 56.9 percent of all gun-homicide offenders over the years 1980-2008. During that era, blacks comprised about 13 percent of the American population, so the black rate of gun homicides was far greater than that of the rest of the population. 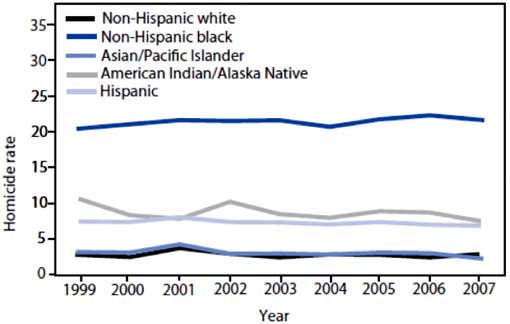 Being a graph of victimization rates, it somewhat understates the racial gaps in murder rates, but it will do.

Don”t assume that white liberals are unaware of black and Hispanic crime rates merely because they get so angry with you for mentioning “hatestats.”

White liberals appear to be frustrated that white conservatives don”t help them disarm dangerous urban minorities who depress their property values. Sure, the Second Amendment was all very fine in 1791, but we need political assistance taking guns away from black and brown gangs.

Yet the notion of white racial solidarity is so unspeakable that all white liberals can do is pretend that the main menace requiring more gun control is rural whites. Not surprisingly, this slander doesn”t make red-state whites feel more inclined to help their city cousins disarm minorities.

“The total death toll from all mass shootings in the entire country over the last three decades is only about as bad as 2012’s murder count in Chicago alone.”

Conversely, a seldom mentioned reason why some white gun owners own guns is so, if worse comes to worst, they can shoot themselves.

The white rate of gun suicides is much higher than the black rate. This isn”t widely recognized because so many gun suicides are old men with terminal diseases who decide to take the quick way out, even if it leaves an awful mess for their womenfolk to clean up. White gun suicides tend to be lowest in urban Catholic states and highest in rural, well-armed, and not very religious Protestant states in the West.

Newspapers seldom mention suicides by the hopelessly ill, so the statistics on gun deaths can be startling, even to the worldly. For example, as part of a gun-control campaign back in 1989, TIME Magazine printed the stories of all 464 people killed by firearms in one week. I flipped through TIME‘s portfolio on the outbound flight of a business trip I took with one of Chicago’s top lawyers. The attorney, an urbane fellow whose brother later became a US Senator, looked the magazine over on the way back, then articulated the same reaction I had left unsaid: “Wow, I didn”t know so many old guys shot themselves.”

In contrast, everybody knows that blacks commit vastly more violent crimes than whites per capita. This seldom aired but widely surmised statistic is central to understanding the confused debates over gun control.

Consider billionaire media mogul Michael Bloomberg, mayor of New York City for the last eleven years, who has made himself the leading advocate of stricter gun-control laws across the country. In his own city, Bloomberg has presided over an extraordinary system of police harassment of young black and Latino males (whom NYPD officers refer to as “the right people“). By early 2012, the NYPD was stopping and frisking 2,200 individuals per day, nearly 85 percent of them African American or Hispanic.