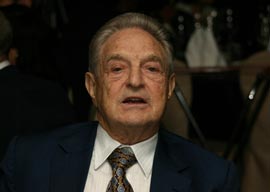 If pure, absolute evil needed one day to be translated into a singular eponym, George Soros would be the perfect choice. This is at least the impression that comes to mind when we surf through the Net and observe not only the man’s multiple crimes but also a host of accusations, curses, and maledictions flung at his person. It seems as if Lucifer himself has slipped into a human form, perfectly recognizable and moving freely about, consorting with his minions whenever it pleases him, hatching murderous schemes and plots while we look dumbfounded on and are unable to frustrate him in any way.

Take, for example, this year’s weighty Munich Security Conference, a walloping farce with hundreds of high-powered flunkies”governmental and otherwise”who nearly all condemned Putin’s annexation of the Crimea yet knew perfectly well which villains had staged the “most blatant coup in history.” Thus when Mr. Soros told this eclectic audience that “Ukraine is what Europe should be: a participatory democracy,” it must have caused some consternation among the more loggerheaded NATO warmongers, and not only because they didn”t have a clue what “participatory” entailed. Yet it can be assumed that they understood perfectly well the old ghoul’s real game, namely to rob Ukraine stark naked with the help of a few fellow oligarchs and the U.S. State Department while leaving only a few crumbs to the increasingly impoverished and desperate Ukrainian people.

A people that has paid a terrible price already. Up to this day, thousands of innocent civilians have been killed, an unknown number of poorly trained soldiers have perished in the conflict, the once-booming eastern provinces have been ruined and are still under siege, and more than a million refugees have escaped to Russia alone.

“It takes only an upright public prosecutor to issue a warrant for the gruesome ghoul’s arrest and consecutive trial.”

Thus another smashing success for Mr. Soros, and completely in line with the general understanding that he had his devilish claws not only in any so-called “color revolution” staged after the collapse of the former Soviet Union, but in almost every violent upheaval that has shaken countries the world over since then.

Therefore it doesn”t come as a surprise if we find him once again as a leading protagonist in the worst upheaval that Europe, and particularly Germany, has witnessed since the end of World War II. Talk is here, of course, about the organized avalanche of illegal immigrants who are inundating the Old World and creating havoc at an unbelievable scale. Proof of the ghoul’s involvement has been abundant, most prominently a guide printed in Arabic by a subdivision of his “Open Society Foundations” calling itself, conveniently, “Welcome to Europe.” Distributed probably by the tens of thousands, it informs potential invaders of how to go about in the most effective way. It also contains maps, tips, and phone numbers of organizations and government welfare agencies that are supposed to help once they arrive in Europe. What it does not mention is the increasing chaos that awaits them at the borders or the growing hostility inside the overwhelmed countries themselves. A hostility that is bound to increase out of all proportion after the horrible attacks in Paris by Muslim terrorists.

Meanwhile, the suspicion thickens that Mrs. Merkel’s insane and politically suicidal open-border strategy has been forced upon her by furtive overlords in league with the ghoul, who owns secret Stasi dossiers whose publication would topple her right away and even send her to jail. Small wonder, therefore, that the resistance to her policies becomes always more pronounced. The brave Mr. Orban of Hungary recently declared that “George Soros is perhaps the strongest example of those who support anything that weakens nation states, they support everything that changes the traditional European lifestyle. Immigration and multiculturalism are endangering Europe’s Christian roots and creating parallel societies. Europe is, after all, the land of democracy and it is impossible to go against the will of the people for a long time and without arguments. If we stick to our Christian values, Europe can be saved, but only if we take seriously the traditions, the Christian roots and all the values that are the basis of our European civilisation.”

Now, this is a notion that should make perfect sense with all our bleeding hearts and assorted Gutmenschen, particularly if they are naive enough to believe that “the protection of refugees” is the central issue. Which it certainly is not, because the ghastly truth appears to be an entirely different one.

“To feel and even think that the White Race is inferior in every conceivable plane is natural, given its history and current documents. Let the White Race perish in blood and suffering. Long live the multicultural, racially mixed and classless ecological society! Long live anarchy!”
Nya Dagbladet, March 2014