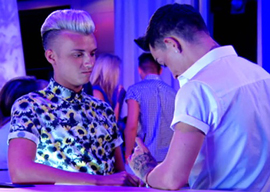 Roughly half of the emails I get from my blog readers ask, “Where do you get this stuff?” while the other half contain “this stuff”: links to crazy stories and freaky photos with “Thought of you” in the subject line.

Take this extremely disturbing photo of two gentlemen wearing what are described as “half-thongs.”

At first (painful) glance, I figured it had something to do with World Pride Day/Week/Month/Geological Epoch, currently underway here in Toronto. Events include”again, according to my inbox”a vegetarian Shabbat at a Protestant Church, a big fake wedding at a big fake castle, a performance by female impersonators hosted by our likely future mayor (who may or may not be one herself”her late husband sure looked gay, though), and other “diverse,” even “family friendly“ activities.

“Harry and Bobby, one can”t help but notice, still more or less possess penises. The same can”t be said for any number of other modern “men,” who, at least according to the media, are multiplying in inverse proportion to their ability to traditionally reproduce.”

(I”m pretty sure current/barely Mayor Rob Ford timed his stint in rehab so’s to get out of officiating at this crap, his true feelings about which were captured in this priceless snapshot. To the consternation of Toronto’s homosexuals and “allies,” Rob Ford usually “celebrates” Pride by escaping to the cottage, and no, not in the George Michael sense.)

Anyhow, back to that “extremely disturbing” photo. Come to find out, those fellows are the stars of some British reality show, enjoying a day at the beach and likely ruining everyone else’s. According to the Telegraph, “Harry” (he’s not) and “Bobby” (indeed) are “spornosexuals.”

“Metrosexuals,” you see, are so twenty years ago. “Spornos” are their “more extreme, sex- and body-obsessed” offshoots. (You”re invited to take a quiz to find out if you qualify.)

If this new breed of men truly is “sex-obsessed,” at least that makes for a welcome change; as I”ve noted here before, the trouble with the “metrosexual” moniker is the “-sexual” bit: such men look like getting laid is near the very bottom of their to-do list, between “reapply gÃ¶t2B Sculpting Paste” and “measure new eyeglass frames with protractor to make sure they”re rectangular enough.”

And Harry and Bobby, one can”t help but notice, still more or less possess penises. The same can”t be said for any number of other modern “men,” who, at least according to the media, are multiplying in inverse proportion to their ability to traditionally reproduce.

Soon after (he became) Dawn, Ennis and his wife of 17 years separated”but three months later, Dawn showed up at work as Don again. He claimed that he had suffered from amnesia and accused his wife of dressing him in a wig and creating a fake ID card with the name “Dawn” on it.

“I am now totally, completely, unabashedly male in my mind, despite my physical attributes,” he said in an email to his colleagues.

One email I got last Friday came with an irresistible subject line: “O.J. = sex change?”

Naturally, I assumed this meant that Mr. Simpson was taking the baton, as it were, from fellow star athlete Bruce Jenner, and flirting with transsexualism. Why not? Richard Speck went from chick slicer to dick slicer in maximum security. O.J. Simpson might as well go from Heisman to “Heis-woman.” Taxpayers foot the bill, and you probably get better treatment behind bars. Hey, if it doesn”t fit, then you must snip!