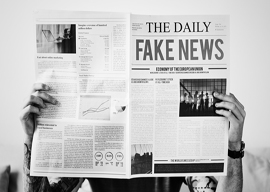 Apart from building the wall, President Trump’s most important act as president so far was his attack on internet censorship this week.

The left controls all the cultural institutions — the establishment media, corporate America, Hollywood, Silicon Valley, public schools and universities. The only breach in their total dominion of the flow of information is the internet.

So now they’re fixated like a laser beam on private citizens yammering to one another online.

Why can’t people accept the officially certified news as delivered by respected truth-tellers like Brian Williams, CNN and NBC — the network that censored Juanita Broaddrick and illegally leaked the “Access Hollywood” tape?

Liberals assessed the situation and correctly concluded: People are learning facts on the internet that we’ve been withholding from them, so now they don’t agree with us. We have to stop this.

The media relentlessly lied to the public about Hillary’s health, denouncing conservatives as “conspiracy theorists” for mentioning it. Then an alert citizen with an iPhone captured Hillary having to be carried to her car at the 9/11 memorial service in 2016.

“It’s not as if the left has ever shown any particular commitment to free speech.”

Mainstream media outlets painted a cherubic picture of Michael Brown after he was fatally shot by a police officer in Ferguson, Missouri. He was a “gentle giant,” gunned down like a dog as he plaintively cried, “Hands up! Don’t shoot!”

HEY! Wait a second! How did that video get out of Brown manhandling a tiny Indian man while robbing a convenience store? That should have been suppressed like the Broaddrick interview!

Would we ever have known about Monica Lewinsky, but for the Drudge Report publishing the blockbuster story that Newsweek had killed?

Currently, the establishment media are in a rage that the public has found out about the modern genocide being waged against white South African farmers.

I can’t even blame them. If I were advising liberals, I’d say: You’ve got only one small breach in the wall of sound; you’ve got to ban conservative speech on the internet.

It’s not as if the left has ever shown any particular commitment to free speech. They love “transgressive” ideas and “controversial” speech — but only when they’re in the minority. As soon as they get control, no more free speech for you! Just look at the universities.

You might think that the exact same people wailing about Trump attacking the “free press” (fake news) would be too embarrassed to use their next breath to demand censorship on the internet. But that’s exactly what they’re doing.

On Sunday night, MSNBC host Kasie Hunt spent her entire interview with Facebook’s former chief information security officer Alex Stamos, demanding that Facebook go pedal-to-the-metal on censoring conservatives. It was left to defender of the reich Stamos to mumble something about not banning speech based on “content.”

Indignant that Alex Jones was allowed to “foment dissent on controversial topics online,” Kasie asked, “Did Facebook react too slowly to the Alex Jones issue? … Does Facebook have a responsibility to take on figures like this?”

Kasie then quoted Stamos back to himself, citing a memo in which he’d written: “We need to be willing to pick sides when there are clear moral or humanitarian issues.”

One “clear,” “moral,” “humanitarian issue” for Facebook — which according to Kasie isn’t doing enough censoring — is to prevent any criticism of caterwauling, protesting illegal aliens. (That sentence just violated Facebook’s Community Standards.)

Last May, I was notified by Facebook’s Julia Smekalina that “one of your posts was reported and found to be in violation of our Community Standards.”

Illegals screaming obscenities at a U.S. senator does not offend Facebook community standards. It was the comment added to the story by the pro-American immigration website, Vdare: “It would be so easy to just deport these parasites @realDonaldTrump. They hate you, they hate your supporters, they hate your party, they hate our country. Why not just enforce the law and send them home?”

(The reason I’m talking about “tweets” when it was Facebook that censored me is that I detest Facebook, so the only “posts” of mine that ever showed up there were my tweets, which used to transfer automatically. Now they don’t, so I’ll never go to Facebook again.)

Here is my full and complete exchange with Smekalina, defender of “Community Standards,” illustrating what a complete joy using Facebook is.

okay, you’ll have to tell me how to delete. nothing I click on offers the option of deleting. I wish you’d spend more time making facebook user friendly.

also, can you please tell me how it violates community standards to support enforcing the law? is the word “parasites” forbidden?

… yes, comparing immigrants to parasites is the specific portion in violation of our policies.

it’s obviously NOT about “immigrants.” it’s about illegal immigrants, i.e. law breakers. is it a violation to call lawbreakers “parasites”?

I never heard from Julia again, but I gather she helpfully deleted the post for me. At the risk of bringing MSNBC’s hammer down on Twitter CEO Jack Dorsey, the tweet’s still available there.