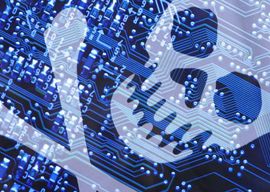 The other night at the Hotel George V, the American Library in Paris held a fundraising dinner of the city’s American grandees. Dotted among the plutocrats were various publishers, journalists, and writers such as Lily Tuck, Diane Johnson, Alan Riding, Dinaw Mengestu, Jack Lamar, and Elaine Sciolino. Scott Turow delivered the after-dinner speech. His theme was, “Will there be books in the future?” I should have gone straight to the bar before he started.

Turow is both a lawyer and a best-selling novelist of crime thrillers such as Presumed Innocent. He’s also the president of the Authors Guild. At the George V, although his Chicago accent was weary from the transatlantic flight, the feisty barrister packed some hard punches. “Any honest assessment of the future must recognize that writing books for a living may well disappear as a profession,” he said, “and with it, for many of the same reasons, libraries as we know them now.” Writers and libraries, and by implication bookshops and publishers, were “endangered species.” This was not the uplifting message we wanted after our gazpacho, braised duck, and Burgundian wines.

“Literature, as music did when Napster came along, is waging a life-or-death war with online piracy.”

Literature, as music did when Napster came along, is waging a life-or-death war with online piracy. Turow admitted that e-books save publishers money on printing, storing, and shipping printed texts. E-books, however, are vulnerable to theft that robs authors and publishers. “The average eighteen-year-old computer geek,” Turow said, “can buy one copy of a book from Amazon, Barnesandnoble.com, or Google and remove the encryption and get it posted online. Of course, the pirate sites are far more sophisticated. Under the Digital Copyright Millennium Act, there is a device for shutting down these pirate sites, though it’s really just a game of Whac-A-Mole because they spring up under a different name.” Turow said that New York’s Macmillan publishing house sends 4,000 takedown notices to brigand sites every month. (Another publisher, John Wiley & Sons, pays three full-time staff to ferret out the pirates and bring them to book. In 2009, Wiley was demanding that 5,000 illegal e-versions of its titles be removed from the Internet per month.)

For the benefit of those suffering, as I do, from economic dyscalculia, Turow explained how Amazon is putting scribblers and publishers on the breadline. Amazon, which introduced the first effective e-reader, paid publishers fifty percent of a book’s cover price to sell it in an e-edition. Using a hypothetical cover price of $30, Turow continued:

So they were paying publishers, let’s say, $15. They then turned around and sold the readers the e-book version for $10. So they lost $5 on every sale. And nobody believed Amazon was engaged in an effort to subsidize publishers. It was of course an effort to drive out any competing e-reader.…And they were well on their way to monopolizing the market. And once that happened, publishers were not going to be getting $15 for what Amazon was going to be selling for $10.