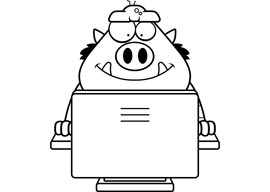 Joshua Goldberg is a walking stereotype of an Internet troll (Fat? Check. Lives with his mom? Check. No social life? Check). Through his complicated network of online personas, Goldberg was a one-man flame war. He impersonated an ISIS-affiliated Muslim radical, a Jewish lawyer, a free-speech-hating feminist, and a neo-Nazi. In a twist worthy of M. Night Shyamalan (and that’s not meant as a compliment), his attempt to tutor an actual Muslim terrorist in the fine art of bomb-making “epic failed” when it turned out that the “actual” terrorist was himself (surprise) a troll (an FBI informant).

If the Internet had a mascot, it would be a morbidly obese chick running a personal ad claiming to be “curvy.” No one online is who or what they claim to be.

Over the past two weeks, the media has largely focused on the terrorism aspect of the Goldberg story. What interests me more is the fact that Goldberg’s imaginary leftist-feminist alter ego “Tanya Cohen” fooled a hell of a lot of conservatives who should have known better. To their credit, several conservative pundits have taken it upon themselves to apologize for their gullibility, including The Wall Street Journal‘s James Taranto (in a very candid Sept. 14 piece) and the Daily Caller’s “Jim Treacher“/Sean Medlock (full disclosure: Even I”ve trolled the Daily Caller. The journalistic standards there are so lax, it’s almost impossible not to troll them).

But while I appreciate the candor of writers like Taranto and Treacher, their penitence doesn”t really answer the question of why so many conservatives were fooled. No well-known writers on the left were taken in. No radical feminists or “antiracists” embraced “Tanya” as one of their own. No one on that side cheered this fresh face in the fight against “hate speech.” I decided to do my best to figure out why my fellow conservatives were so credulous.

“Is something as simple as a lack of writing talent on the right the reason so many conservative bloggers got fooled by “Tanya”?”

One gullible conservative who has been completely silent since Goldberg’s arrest is Michael Walsh of PJ Media and National Review. Many conservatives were fooled, but none to Walsh’s extent. Walsh (who himself used to essentially “troll” under the pen name “David Kahane”) devoted no less than six PJ Media pieces to the nonexistent “Tanya”: Jan. 6, Jan. 14, Jan. 19, Jan. 21, Feb. 2, and April 25. Walsh could not get enough of “Tanya,” even though he conceded at the time that some of his readers warned him he might be getting duped. However, he dismissed those concerns, assuring his readers that, due to his expertise, he believed “Tanya” to be real.

I knew Michael Walsh quite well for several years. He was a close friend, and I can vouch for the fact that he’s not a stupid man. In fact, he’s very sharp. But he’s not a great writer. He’s the only friend I”ve ever had who’s been the subject of a Cracked.com article and an L.A. Times article about what an abysmal writer he is (both pieces focus on his ill-fated Casablanca sequel, considered by some to be one of the worst novels of the 20th century”a novel that, in the words of Cracked, exists only to “rape Casablanca‘s venerable corpse”).

Is something as simple as a lack of writing talent on the right the reason so many conservative bloggers got fooled by “Tanya”? Uninspired writers are more likely to scrape the bottom of the barrel for anything that can fill a column before deadline. This month alone, Breitbart.com took a complete, absolute nobody”a random moron named Monica Foy with only 20 Twitter followers”and turned her into a story of the week because she tweeted something disrespectful about a slain police officer. Similarly, a slew of conservative sites took an obviously satirical YouTube video by a young would-be humorist named Pupinia Stewart and presented it as proof of a decline in American educational standards.

But good conservative bloggers, the ones who care about their work, also got fooled by Goldberg. I pegged “Tanya” as a phony the moment I read “her” first piece, but it was only when I started to see genuinely good writers taking the bait that I began alerting editors to the fakery. In March of this year I had the Times of Israel pull one of Goldberg’s fakes only because I couldn”t talk sense into an otherwise excellent conservative writer who was about to embarrass herself by falling for the fraud. And I wrote about one of Goldberg’s personas, “Dinah Silverstein,” here at Taki’s, calling the nonexistent leftist a “fictitious, over-the-top caricature created by an Internet troll.”

Maybe I caught on quickly because it takes a devious Jew to know one. That still doesn”t answer the question of why Goldberg was so successful in his ruse. For perspective, I decided to turn to one of the greatest Internet trolls in history, “EugeneNix,” a friend of mine. Nix was one of the masterminds behind the “CoonTown” caper that nearly brought Reddit to its knees (“CoonTown” was a purposely offensive subreddit engineered to expose Reddit’s leftist bias, and laugh as you might at the name, it made national headlines).

Nix, it turns out, knew Goldberg (to whatever extent any troll can know another troll). They interacted online as moderators of CoonTown (Nix was unaware of Goldberg’s illegal endeavors). I asked Nix to give me his opinion of his former colleague:

He was a competent troll, but also a stupid one. Playing around pretending to be an ISIS leader setting up terror attacks is not exactly something I would ever expect to result in a good outcome. Judging by his behavior before his arrest, he seemed like he was on the path to going full-out sperg [troll slang for Asperger’s] retard. Looks like it went farther than I realized. The whole thing is pretty strange considering I”m at a loss for what his motivations were other than autism or chaos. A good troll pits human stupidity against itself to goad idiots into being hysterical. It helps maintain a hostile environment for low-quality, low-information people. And to be completely honest, there’s the “howling at the moon” factor that cannot be discounted by any means. It’s fun to poke humorless ideologues with sticks.

But why were conservatives such easy prey?

Conservatives (well, the GOP) thought running John McCain in 2008 would somehow not end with everybody laughing at them, so I”m going to have to consider that maybe the IQ average is just not as high as it ought to be. I”ve suspected that whites are more gullible, and trolling seems to support that, though the internet is mostly white people looking at cat pictures to begin with.