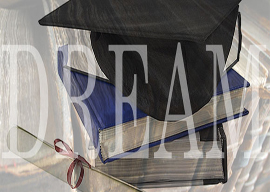 The so-called DREAM Act would create an official path to Democratic voter registration for an estimated two million college-age illegal aliens. Look past the public relations-savvy stories of “undocumented” valedictorians left out in the cold. This is not about protecting “children.” It’s about preserving electoral power through cap-and-gown amnesty.

Senate Majority Leader Harry Reid announced this week that he’s attaching the DREAM Act to the defense authorization bill. With ethnic activists breathing down his neck and President Obama pushing to fulfill his campaign promise to Hispanics, Reid wants his queasy colleagues to vote on the legislation next week.

Open-borders lawmakers have tried and failed to pass the DREAM Act through regular channels for the past decade. That’s because informed voters know giving green cards to illegal alien students undermines the rule of law, creates more illegal immigration incentives and grants preferential treatment to illegal alien students over law-abiding native and naturalized American students struggling to get an education in tough economic times. This bad idea is compounded by a companion proposal to recruit more illegal aliens into the military with the lure of citizenship (a fraud-ridden and reckless practice countenanced under the Bush administration).

Out-of-touch pols might want to pay attention to the world outside their bubble.

DREAM Act lobbyists are spotlighting heart-wrenching stories of high-achieving teens brought to this country when they were toddlers. But instead of arguing for case-by-case dispensations, the protesters want blanket pardons. The broadly drafted Senate bill would confer benefits on applicants up to age 35, and the House bill contains no age ceiling at all. The academic achievement requirements are minimal. Moreover, illegal aliens who didn’t arrive in the country until they turned 15—after they laid down significant roots in their home country—would be eligible for DREAM Act benefits and eventual U.S. citizenship. And like past amnesty packages, the Democratic plan is devoid of any concrete eligibility and enforcement mechanisms to deter already-rampant immigration benefit fraud.

The DREAM Act sponsors have long fought to sabotage a clearly worded provision in the 1996 Illegal Immigration Reform and Immigrant Responsibility Act (IIRIRA) that states: “Notwithstanding any other provision of law, an alien who is not lawfully present in the United States shall not be eligible on the basis of residence within a State (or a political subdivision) for any postsecondary education benefit unless a citizen or national of the United States is eligible for such a benefit (in no less an amount, duration, and scope) without regard to whether the citizen or national is such a resident.”