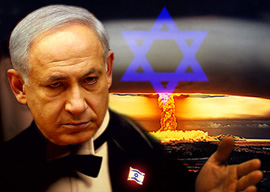 What is Bibi Netanyahu up to?

With all his warnings of Iran’s “nuclear capability,” of red lines being crossed, of “breakout,” of the international community failing in its duty, of an “existential threat” to Israel, what is the prime minister’s game?

And if Tehran refuses to surrender its right even to a peaceful nuclear program, he wants its nuclear facilities, especially the enrichment facility at Fordow, deep inside a mountain, obliterated.

And he wants us to do it.

How has Bibi gone about getting America to fight Israel’s war?

He is warning, indeed threatening, that if we do not set a date certain for Iran to end enrichment of uranium, and assure Israel that we will attack Iran if it rejects our ultimatum, Israel will bomb Iran and start the war itself.

“The Israelis were furious, but suddenly the war talk subsided.”

Fail to give us assurances that you will attack Iran if Iran refuses to surrender its nuclear “capability,” Bibi is warning, and we will attack Iran, with all the consequences that will have for you, for us and for the Middle East.

This is diplomatic extortion.

Thus far, Obama has called Bibi’s bluff, assuming it is a bluff.

The United States has refused to set a date certain by which Iran must end all enrichment. Hillary Clinton said this weekend that we are “not setting deadlines.” And the election, which could give Obama a free hand to pursue his own timetable and terms for a deal with Tehran, is only eight weeks off.

If Obama, no fan of Bibi, wins, he can tell Bibi: We oppose any Israeli pre-emptive strike. If you attack Iran, we will not support you. Nor will we follow up an Israeli attack with an American attack.

Bibi’s dilemma: Despite his threats of Israeli strikes on Iran, Tehran is taunting him. His Cabinet is divided. The Shas Party in his coalition opposes a war, as do respected retired generals, former Mossad leaders and President Shimon Peres.

And the Americans have sent emissaries, including Secretary Leon Panetta, to tell Bibi we oppose an Israeli attack. The Pentagon does not want war. Three former U.S. Central Command heads oppose a war. And last week, Chairman of the Joint Chiefs Gen. Martin Dempsey said he does not wish to be “complicit” in any Israeli attack.

Implied in the word “complicit” is that Dempsey believes an Israeli first strike on Iran could be an act of aggression.

The Israelis were furious, but suddenly the war talk subsided.

From the clashes, public and private, between these two close allies, it is apparent the United States shares neither Israel’s assessment of the threat nor Israel’s sense of urgency.

Why not? Why, when Netanyahu says Israel is facing an “existential threat,” do the Americans dismiss it?