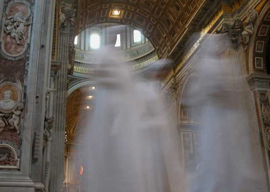 In Britain, there are ghosts everywhere. Here in Italy, there are none. Our house is nevertheless infestata (haunted), according to my wife”not by ghosts but by demons.

Apparently, the Devil and his cohorts are busy 24/7 casting malefici (evil spells) on Carla and our five small children. Who else, for example, but Il Grande Disturbatore (The Great Disturber) himself could have deposited those strange and possibly human bones outside our front door the other day? My mother-in-law’s cat, perhaps? Maybe, but if it was the cat, a pampered but lethal tabby, she was obviously acting on the orders of L”Astuta Serpe. My wife says I am not exactly posseduto (possessed) but am clearly un portatore sano (a symptom-free carrier) of nasty malefici.

In Italy, Virgin Mary statues weep tears of blood all the time and miracles are two a penny. Sometimes, but only in Catholic countries, the Virgin Mary herself appears to peasants and talks to them.

“In Italy, Virgin Mary statues weep tears of blood all the time and miracles are two a penny.”

In the Bosnian town of Medjugorje, the Blessed Mother has apparently appeared regularly since 1981 to local Catholics. My wife has dragged me there more than once, but the only miracle I spotted was that you can still smoke in bars and restaurants. But who am I to say? I”m an agnostic Anglican heretic and therefore worse off even than a Jehovah’s Witness according to Carla.

Yet in Italy I cannot remember anyone ever talking about any house, however old, that is haunted by a ghost. It is all so different from my childhood in the English countryside, where ghosts are as common as muck.

Near Canterbury in Kent my eccentric mother stayed for a while as one of a handful of live-in guests”each with his or her own bizarre story”at a dilapidated 17th-century country house called Broome Park. It had once belonged to Field Marshal Lord Kitchener of Khartoum (1850-1916).

I never once managed to get a decent night’s sleep in that vast decaying old place whose pitch-black unlit corridors and locked doors to secret rooms terrified me. Its ornamental gardens contained huge urns which had goat’s heads for handles and whose sides were streaked with dark red stains. Among the rumored resident ghosts was the late wife of the building’s owner, Major Gel. The Major drove an old Bentley and looked like a ghost even though he was alive. It was said that his wife had once been a glamorous avant-garde artist who had known Hemingway in Paris. She died mysteriously after falling down the house’s huge main staircase. Her paintings were everywhere and I was petrified of seeing her ghost, but I never did. Broome Park is now a swanky golf club and holds no fear because the soul of its past has been ripped out of it.