Have Your Cake But Don’t Eat It 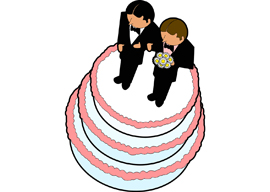 NEW YORK—If you’re having a gay wedding, and your cake has been baked by a man who thinks gay marriage is an abomination against God, do not eat the cake.

I’m surprised I have to tell you this.

People like myself are in no danger at all because we learned years ago to never eat the wedding cake.

Quick digression for all men who hate weddings as much as I do: Volunteer to park the cars. It’s less boring than the reception, it makes you late for everything (“Sorry, I was parking the latecomers”), and the family thinks you’re a selfless dependable friend. You can also smoke.

But apparently Charlie Craig and David Mullins didn’t get the memo, because when they walked into the Masterpiece Cakeshop in Lakewood, Colorado, in 2012 and met devout Christian owner Jack Phillips, they thought what was being discussed was just a cake.

Actually, to be precise, I think Charlie thought it was just a cake, but David had all his wedding-day fantasies tied up in the perfect symbolic cake, so much so that when they were turned away by Phillips because “That’s just a cake that I can’t do,” David broke down in tears in the parking lot. The Michelangelo of Colorado Cake-itecture had shattered David’s dreams like freezer-hardened icing hurled against a steel girder.

Wedding Cake Drama is nothing new, of course, and there have probably been at least a million prospective husbands who have said, “Let’s not make a federal case out of what kind of cake we have at the wedding,” but until now they were speaking metaphorically. Charlie and David, on the other hand, went to the Colorado Civil Rights Commission and got a judgment against Jack for “sexual-orientation discrimination.” Among other things, the commission required Jack to institute “staff training” of his immediate family members. This would be sort of like reading your wife her Miranda rights. Forced with either designing cakes for gay weddings or breaking the law, Jack decided to shut down the wedding-cake business entirely, thereby sacrificing 40 percent of his business. But he appealed the case in hopes of someday reviving his quite elaborate cakemanship career.

“If you know the guy disapproves of gay marriage, why do you want him to design your cake in the first place?”

I have several questions about this case, which came up before the Supreme Court last week, namely:

If you know the guy disapproves of gay marriage, why do you want him to design your cake in the first place?

Haven’t you ever watched Cake Boss or Cupcake Wars or Ultimate Cake Off or Amazing Wedding Cakes or Ace of Cakes? We know from reality TV that the more complex the cake, the more likely it’s gonna crumble like a Lego Ferris wheel being chewed up by a bulldog. All he has to do is put a crack in one of the main support struts and you’ve got angel food all over the Hilton elevator.

But even assuming the cake is structurally sound…

How were Charlie and David gonna get the cake from Colorado to Massachusetts?

Gay marriage was illegal in Colorado in 2012, so the ceremony took place in Massachusetts. I’ve got to assume that FedEx, DHL, UPS, and the Postal Service would all decline responsibility for wedding-cake transport, which means 28 hours of driving, Denver to Boston, only you probably need to double that because you need to slow way down to avoid bumps that would crater the cake. In addition, you need at least three people working in shifts, sitting in the back seat with the cake in their laps, protecting it from any jarring motions, and you need a vehicle with an air conditioning system that can maintain a constant 42-degree chill for the entire 2,000 miles, which means the Cake Crew needs to be outfitted with North Face polar parkas. I know the gay community hangs together, so you would have a lot of volunteers, but it would be like watching Cannonball Run in slow motion forty times backwards with winter breath condensation.

Why did Justice Ginsburg keep bringing the discussion back to whether a wedding cake is an artistic expression or purely utilitarian?

Ruth must have been to some really bad weddings. Otherwise she would know that the purpose of a wedding cake is to show up on Instagram, so there’s nothing utilitarian about it. Yes, Jack Phillips is indeed an artist—the word “masterpiece” is in the name of his business! If you don’t have Jack Phillips, all you have is Sara Lee. It’s not about butter, eggs, and flour. It’s about all the stuff on top. Therefore the Solicitor General was correct in his analogy. Compelling Jack Phillips to create artwork he doesn’t believe in is the same thing as forcing an African-American sculptor to make a cross for a Klan service, or compelling a gay opera singer to sing at Westboro Baptist Church. Jack probably wouldn’t do a porn-star wedding cake, either, or one of those cakes with the breasts on it that rednecks use for bachelor parties.

So the lawyer for the state of Colorado kept saying those examples don’t matter because they don’t involve a “protected class,” and gays are a protected class that can’t be messed with. Otherwise you would have bakers everywhere putting “We Don’t Do Gay Weddings” signs in their windows. So here’s my next question:

Okay, I’m generalizing. I’m stereotyping. But I find it hard to believe that you couldn’t find 17 other bakers—probably gay bakers—who would not only do a same-sex-marriage wedding cake, but would put their heart and soul into the effort. I could envision a rainbow cake of 37 colors, many of them pastels, with two white chocolate grooms on the towering eighth layer. At one point Chief Justice Roberts asked the Colorado lawyer whether Catholic Legal Services should be required to take a same-sex-marriage client who wants to file a civil rights case. What he didn’t say is, you don’t want a Catholic lawyer on that case. You want a gay guy.

And the Colorado lawyer kept saying, “Well, it’s just that if he designs a certain type of cake for one client, he has to offer a similar cake to all clients.”