Having Trouble Maintaining an Election? 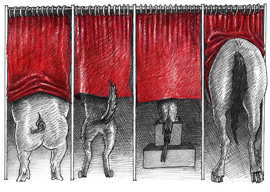 Ooh, that smell! Can”t you smell that smell? Pew! It’s the latest report from the Pew Center on the States, and it concludes that America’s voter-registration system stinks.

A possible contributor to the problem is the fact that only six states currently require voters to present photo ID at the polling place. In addition to those six, South Carolina and Texas have passed laws requiring photo ID from voters, but their petitions are being stonewalled by Eric Holder’s sleazy mustache. In South Carolina‘s case, Holder’s goons have alleged that requiring photo ID would place an unfair and discriminatory burden upon the state’s black voters, who are presumably too lazy or stupid to learn how to acquire photo ID.

“When has Eric Holder shown anything but contempt for the majority of Americans?”

In many other states, you can register to vote without photo ID. But in nineteen states plus the District of Columbia, no ID whatsoever is required of registered voters at polling places.

What could possibly go wrong?

It’s not like you need photo ID to cash checks, open bank accounts, or buy Sudafed. Or board an airplane or drive a car. Or apply for welfare and food stamps.

It’s not like 70% of likely American voters recently said they see nothing wrong with requiring photo ID at polling places. But when has Eric Holder shown anything but contempt for the majority of Americans?

Although this will shock, awe, surprise, and flabbergast you, Democrats are making this a racial issue. Claiming a mystical soothsaying ability to peer inside the dark evil hearts of Republicans, they claim it has nothing to do with making elections honest and is merely a cynical move to “disenfranchise” the poor, the elderly, the poor blacks, the poor elderly, and the poor black elderly.

Florida Rep. Debbie Wasserman Schultz, who’s apparently dumber than a plastic lawn flamingo, said that requiring voter ID really means that Republicans “want to literally drag us all the way back to Jim Crow laws.” Bill Clinton and his allegedly coke-perforated septum have also raised Jim Crow from the dead for this occasion.

Why would they ever do something so insane as to let facts get in the way? Georgia passed a law requiring photo ID in 2008. It was obviously intended to disenfranchise the poor, because it allows for residents to apply for a free voter ID card. The law devastated, discriminated against, and disenfranchised Georgia’s black voters so thoroughly that at least ten percent more of them are allegedly now registered since it passed. Georgia’s black electorate was so thoroughly intimidated and frightened away from the polls that their participation in midterm elections reportedly increased 17% from 2006 to 2010.