He Who Would Battle Monsters 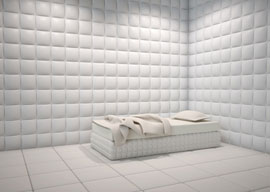 My friend Hugh Dancy came to London this week while on a break before filming a series about that least friendly of fictional characters, Thomas Harris’s serial killer Hannibal Lecter. One of Harris’s characters calls Lecter “a pure sociopath…it’s so rare to get one alive.”

I am necessarily fascinated with sociopaths and psychopaths. These are equivalent terms, by the way. The former, more recent term focuses on social causes for the condition, while the latter term has returned to favor as biological origins are explored. I have just completed the first draft of my first novel, The Making of Harry Greene, whose title character is one of these strange creatures. He moves through life with an amorally penetrating mind and body, piercing through the other characters and scenery like a hard-nosed bullet.

It wasn’t Lecter that Hugh and I spent our time discussing in a well-oiled evening in the pub, but that far more expertly drawn sketch of the species by William Shakespeare in his masterpiece Othello. Critics have long been obsessed by Iago, an animal of “motiveless malignity” as Samuel Taylor Coleridge called him, as was Shakespeare himself. No other secondary character in all his works has more lines than the principal.

The early 20th century Oxford Professor of Poetry A. C. Bradley came closest to pinning Iago’s psychology down over a decade before the term “psychopathy” had been defined in his lectures on the play. My theory is that Shakespeare did something unique in literary history”he turned a vacuum into a virtue.

Othello was written somewhere around 1602, most likely immediately after Hamlet. The original source of Othello was the 1565 Italian story “A Moorish Captain” by Giovanni Battista Giraldi. In that tale, the betraying agent is a character so minor he is given no name”he is called simply “the ensign””nor any motive for betraying his captain. A lesser writer would have fleshed out this cipher as a character who could justify his actions, most likely along the lines Iago falsely offers for himself: annoyance at being passed over for a promotion by Cassio or jealousy that Othello may have slept with his Emilia. But Shakespeare creates a man who says many things but in the end does what he does simply because he can.

Iago has a conscienceless and fearless soul which has served him well up to the beginning of the play within Venice’s armies, but when an opportunity arises to displace a minor rival and belittle his triumphant captain, he enters into a labyrinthine scheme which results in the death of four major characters. He kills one”his wife”by his own hand for daring to reveal his schemes in public. And then this man of so many words in the play, who is called over a dozen times in the script “honest Iago,” answers the demand for his reasons under threat of torture with the stunning lines:

Demand me nothing: what you know, you know:
From this time forth I never will speak word.